Thanks to its growing success, honey hunting trip has gained a reputation in adventure sports operation in Nepal. It's just some time before people start venturing to test their skills, hanging a few hundred feet above the ground on a plateau in the middle of a swarm of honey bees to cut into honeycomb hives, a rugged and adventurous challenge.

Honey is harvested in various areas, of course, but procuring honey in the Himalayan region carries out hunting on the isolated hillsides of Nepal. Let's get to know this trip's main facets.

Honey hunting is culturally important and has been practised in Nepal for centuries. Earlier, during the Udhauli and Ubhauli festivals, it was performed twice a year. 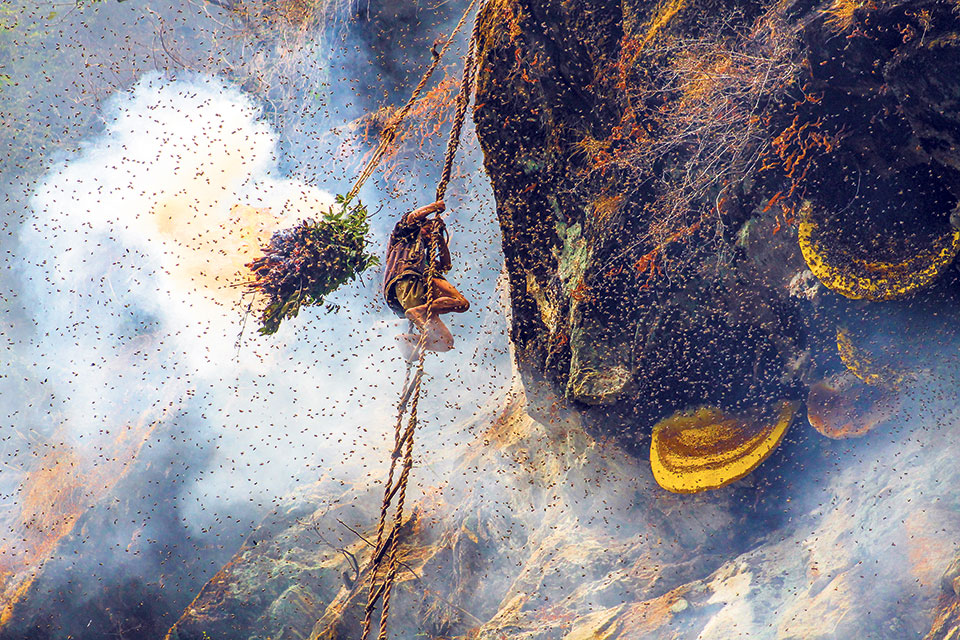 In an attempt to harvest the purest type of honey, Indigenous Himalayan people have been practising this craft. While a tradition, honey hunting is often performed for honey's medicinal values.

Honey intake stimulates digestion and serves to enhance immunity. Honey's effects help retain body temperature, which is critical if you are a resident of the Himalayas. No wonder these people, for this edible molten gold, gamble their lives.

Honey harvested from the hives of such wild bees is often assumed to have a strange hallucinating quality, which has lately drawn such finding natural highs.

Getting to the Place of Honey Hunting

Hunting for honey is carried out at various sites. Lamjung and Hinku Valley are the two main sites, though. In Lamjung, Marsayangdi natives plan planned honey hunting at Chopli cliff twice a year. This area lies northwest of the city of Kathmandu.

A 6-hour bus ride along with Prithvi Highway takes you from Besisahar to Lamjung. A magnificent trip consists of a pristine landscape followed by Trishuli and Marsayangdi River.

In Hinku Valley, the other famous honey hunting game is carried out. This valley is located in the Khumbu area, northeast of Kathmandu, which is popular for hiking and mountaineering activities.

This famous location, also renowned for the scaling of Mount Kusum Khangkaru (6367 m), will take you on a flight from Kathmandu to Lukla and a hike along the Everest trail.

Enjoy your stay with a village full of hospitable locals and hope to witness brave exploits of men who carry on this game hunting with vigour.

Rituals of Honey Hunting in Nepal

It all begins with a blessing for the participants, and early in the morning, the elders take the lead. The hunting party and visiting audience embark on a hunting trip with the typical respect to cliff gods and deities.

First, climb up the honey hunting cliff. The hunting party takes up a trail to the peak. The visiting party selects a spot under the cliff with a view of bee-hives from the bird's eye that will, in some time, be a battlefield.

At one end of an extended bamboo stick, the hunting party prepares its knife, basically a blade wave. It is used by the hive to be brought down, and honeycomb gathered.

To focus a basket under the honeycomb, a second bamboo stick is used to fall directly into the basket for that. As a courageous hunter climbs down this ladder before eye-to-eye with the bees, a squad drops the specially built ladder off the top of the mountain.

To subdue the bees, he then cautiously positions a packet of smoke (generally a bunch of leaves set on fire). Breaking into the hive as bees are disturbed by the smoke, his task is deliberately accomplished by the hunter.

Finally, the gathered honeycombs drop from the bottom of the cliff into a basket hanging from a rope that is then dropped down to the collectors witnessing this occurrence.

In general, landing with fresh-off-the-cliff honeycomb is an overwhelming experience. The honey from harvested honeycombs is the purest, having undergone a brave act.

The World's Best, no doubt! It is so pure that when eaten above the average level, it is suspected that it hallucinates individuals. A couple of sips could leave you exhausted.

A delicacy is a honeycomb itself and locals are battling to get a taste. Honey hunting is more than what meets the eye in Lamjung and Hinku Valley.

Though extracted honey is also available at prices fixed by the locals themselves, due to visits by enthusiasts from around the world, a honey hunting trip in Nepal has become a tourist attraction and a source of revenue.

Let's face it; nothing can be as daunting as battling a swarm of bees, hanging off a cliff face, standing on a suspicious rope ladder while ensuring that the honeycomb set doesn't fall.

Be a spectator or dare yourself to do it! In Nepal, Honey Hunting is an off-the-book experience.