Bajrayogini Temple is a Tantrik temple situated in the Kathmandu Valley of Nepal, in Sankhu. It is also well established as Temple of Bodhisattva. In reality, the temple is a kind of temple complex, while King Pratap Malla constructed the main temple in the sixteenth century.

Vajrayogini is a tantric goddess of Buddhism, and she is also conflated with Ugra Tara, a type of the Ekajati Dharmapala of Buddhism. Yet to all Buddhists and Hindus, the temple is holy.

Where is the Bajrayogini Temple?

The Temple of Bajrayogini built by King Pratap Malla is located some 20 kilometres northeast of Kathmandu. The region where it is situated is sometimes referred to as Gunbaha, which can loosely be interpreted as a 'recreational forest spot' from Newari.

The main temple is a large three-story structure, which has been meticulously designed with utmost attention to detail.

In this temple, you'll possibly find a statue of the goddess Bajrayogini depicting a red mask with three eyes as well as hands beautifully painted with the thumb and middle finger. They cover her figure with ornaments.

Myth behind the Bajrayogini Temple

The temple site was once a forked piece of stone, which spouted flames, according to a holy book that was once discovered long ago.

This was very interesting because the majority of the earth was filled in snow and a five-coloured light appeared suddenly, which turned out to be the volcanic goddess. The goddess directed a temple to be constructed upon the sight of her birth, and since then priests have used the nine surrounding caves to support this temple.

Superior enlightenment was allegedly granted to the first priest to serve here, and Bajrayogini is considered one of the wisest and greatest gods worthy of giving this blessing.

Bajrayogini is the oldest deity of the tantric. There are three types of goddesses inside the Bajrayogini temple. Her head is missing in one way; she holds it in her hand.

Her head is alive, in a different shape. In nature, the former shape represents the Hindu goddesses Chhinamasta. Two yoginis on either side of her still attend the main goddess.

She emerges in gold, holding her head in her left hand and Katari in her right side. She seems to be naked, stretching her right leg and leaning over her left knee. 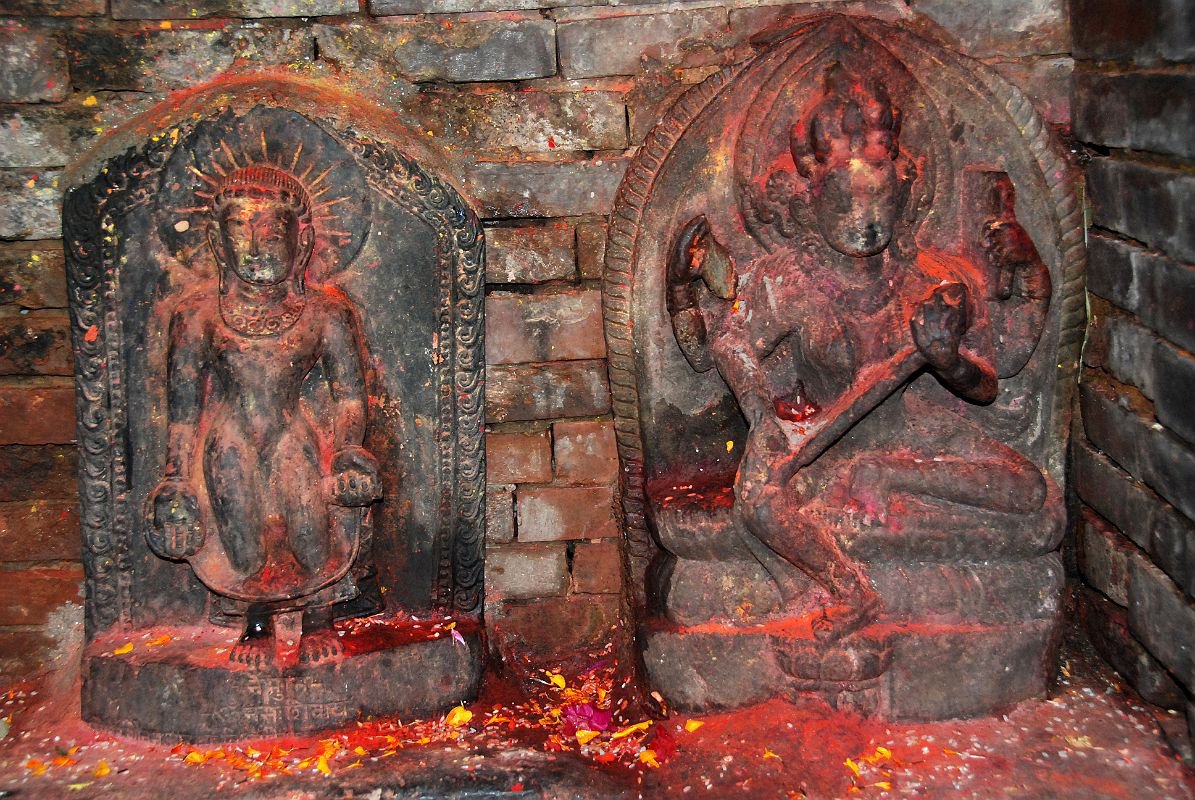 In red shape, she is surrounded by the awful burning grounds from all sides. She looks naked and has three red eyes, circular-shaped brows, protruding belly and tongue and standing upright in Alidha pose.

Carrying Kapla in the left hand and vajra in the right hand, this shape is very similar to Nairatma and Vajravarahi hanging Khatwanga from her left shoulder.

There is a lovely water tap in the town, complete with a marble statue dating back to the 4th century. The draw here is not just separate temples but also the many other fascinating temples and caves that surround it-some of which are even older than the temple itself.

A carved double chamber with window attributed to being used by Marpa Lotsawa is among the caves in the region. However, nearby is a tiny chamber carved into a small cliff, where Milarepa was walled in for refuge in solitude. A very long, carved stone stairway leads up to the peak of the building.

Caves at the Bajrayogini Temple

A tiny square hole in the back wall of the compound suggests a relaxing room. Another cave just behind the west patio of the compound (recognizable by the subtle Tibetan inscription of the Avalokitesvara mantra above the door) is recognized as Dharma Pap Gupha.

Those who can squeeze through the opening into the inner chamber reveal their virtue (dharma); those who can't, their sin (pap).

The famous Bajrayogini Fair is held in ChaitePurnima, the Gregorian calendar's Full Moon Day in March or April.

The earthquake that hit Sankhu City on April 25th 2015 had an enormous effect. Temple Bajrayogini was no different. The engineers hadn't declared the temple secure.

Renovation of the temple is essential to guarantee protection. The Bajrayogini temple sculptures are comfortably moved, and wooden planks support the shrine.