Buddhism in Nepal: Must Visit Buddhist Sites in Nepal

Nepal can be taken as an example, unlike any other nation, as both Hindu and Buddhist share the same temples for respective practices of adoration and conduct. Like Hinduism, Buddhism is amongst the most followed religion in the country.

Buddhism is an essential religion in Nepal, as it is the birthplace of Lord Buddha, the Light of Asia. Today in this article, we go through the aspects of Buddhism in Nepal and all the important Buddhist sites spread across the country.

Buddhism as a Religion

With more than 520 million followers, and above 7 per cent of the global population, known as Buddhists, Buddhism is the world's fourth-largest religion. Buddhism comprises several rituals, values, and philosophical practices that are primarily based on Buddha's original teachings and the subsequently translated ideologies.

Sometime between the time of the 6th and 4th centuries BCE, it emerged in ancient India as a Sramana tradition and spread across most of Asia. In general, scholars consider two main current branches of Buddhism: Theravada (Pali: "The School of the Elders") and Mahayana (Sanskrit: "The Great Vehicle").

Most Buddhist traditions share the goal of resolving suffering and the period of death and rebirth, either through achieving Nirvana or by the journey of Buddhahood. In their understanding of the road to salvation, the relative importance and canonicity attributed to the numerous Buddhist scriptures, and their teachings and practices, Buddhist schools differ.

Seeking shelter in the Buddha, the Dharma and the Sangha, observance of spiritual precepts, Buddhist monasticism, Buddhist meditation, and cultivation of the Paramitas (perfections or virtues) are commonly known rituals.

Buddhism has begun to spread in Nepal by Indian and Tibetan missionaries since the reign of Ashoka. The Kiratas were amongst the first people in Nepal, followed by the Licchavis and Newars, who accepted Gautama Buddha's teachings.

In the Shakya State, Buddha was born in Lumbini. It is considered that Lumbini lies in the present-day Rupandehi district of Nepal's Lumbini province.

In Nepal, Buddhism is the second-biggest faith. According to the 2001 census, Buddhism, comprising primarily of Tibeto-Burman-speaking ethnicities, the Newar was practised by 10.74 per cent of Nepal's population.

However, Buddhists make up just 9 per cent of the population of the nation in the 2011 census. It was not possible to allocate with certainty the year in which Prince Siddhartha, Buddha's birth name, was born, typically about 563 BCE.

Hinduism has absorbed Buddhist ideals in the hill and mountain regions of Nepal to such a degree that they have exchanged deities and temples in many instances. For starters, for both Hindus and Buddhists, the Muktinath Temple is sacred and a typical house of worship.

History of Buddhism in Nepal

As the history of Nepal has seen several shifts in the rule of various groups, Buddhism in Nepal can be split into several phases. During Lord Buddha's lifetime, Buddhism came to Nepal.

The Shakya Clan of Nepal

Gautama Buddha returned to Kapilvastu after achieving Nirvana in Bodh Gaya, India, and claimed that he would transform his whole family and clan into Buddhism.

It was later assumed that the Shakya clan would arrive in Kathmandu and spread Buddhism in Nepal's capital city. The Shakya Clans may be viewed as Nepal's first Buddhist clans.

The Pre-Licchavi Era is one of the essential Buddhist occurrences in Nepal. Deity Manjushri (one of Buddhism's significant bodhisattva) cut the gorge in Kathmandu during King Jitedasti 's period, according to Swayambhu Purana.

In the 2nd century CE, the Great Mauryan Emperor Ashoka also arrived in Lumbini and established a pillar in Lumbini and sent missionaries to spread the Dharma in Nepal. Ashoka the Great, according to Buddhist tradition, also visited Patan and constructed four stupas.

During the Licchavi Period, several ancient Buddhist sites were found in the Kathmandu Valley such as Boudhanath Stupa, Swayambhunath Stupa, four Ashoka's Pillar in Patan, and numerous other Buddhist stone caityas.

The cart festival to honour and worship Avalokiteshvara, or also known as Matseyendranath, began during the 7th century, caitya worshipping tradition.

Thousands of the general population also worship and celebrate this famous festival, and it is one of the most popular festivals in the Kathmandu valley.

Bhrikuti, the Green Tara of Tibetan Buddhism, was thought to be the daughter of the first Anshuvarma King of Licchavi. Bhrikuti 's marriage to Tibetan King Songsten Gampo is known as one of Tibetan Buddhism's most prominent cases.

In Tibet, Bhrikuti is thought to have initiated Buddhism. In the history of Buddhism in Nepal, the Malla Period is known as the golden era. The Paubha confronted the Tibetan Buddhist Thangka, introduced by Newar in the Kathmandu valley during this time.

During the reign of the Shah and Rana dynasties, Buddhism suffered heavily for around 500 years. During this phase, many Buddhist monks were expelled.

Best known as the birthplace of Gautama Buddha, Nepal is full of religious sites that are crucial for the followers of Buddhism. We have prepared a list of a few of them. They are:

In the history of Gautama Buddha and Buddhism, Kapilvastu and Lumbini bear considerable significance. Lumbini is regarded as the world's four most famous Buddhist pilgrimage sites.

Kapilvastu is best known as the birthplace of Lord Buddha, and Rahula, one of the ten great disciples, became Lord Buddha's disciple in Kapilvastu.

One of the important centres for Tibetans is Boudhanath Stupa. The Boudhanath Stupa is Nepal's largest stupa and is thought to have been built during the Mughal invasion. 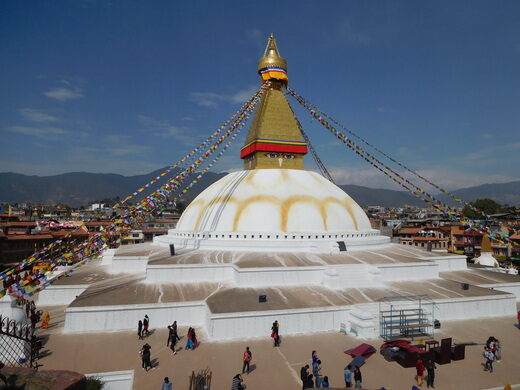 The giant stupa is located at about 11 km (6.8 mi) from the centre of Kathmandu and lies on the northeastern outskirts of the capital city. 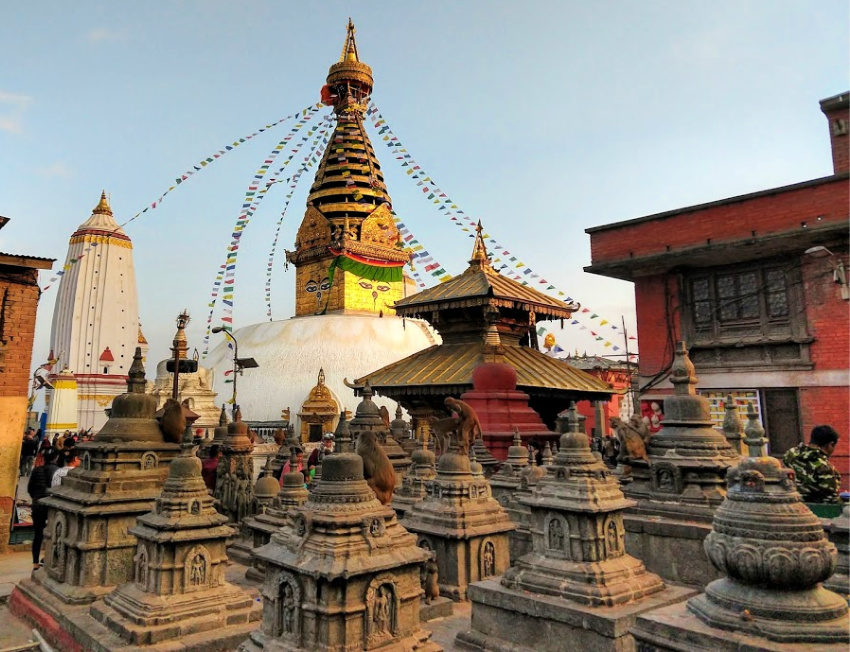 This beautiful stupa lies on top of a hill on the western side of Kathmandu and is better known as the Monkey Temple among foreigners.

In the ancient city of Lalitpur, Hiranya Varna Mahavihar is one of the most fascinating, beautiful, and most adorned Buddhist temples in Nepal and is popularly known among tourists as The Golden Temple.