Prior to the revolt, the palace was the Kingdom of Nepal's monarch's residence and principal place of function, and hosted state occasions. Constructed by King Mahendra in 1963, the current palace complex contains an extensive collection of courtyards, parks, and houses.

Why the name Narayanhiti Durbar?

The name "Narayanhiti" consists of two 'Narayana' and 'Hiti' phrases. Narayan is Vishnu, the Hindu god whose temple is opposite to the palace. 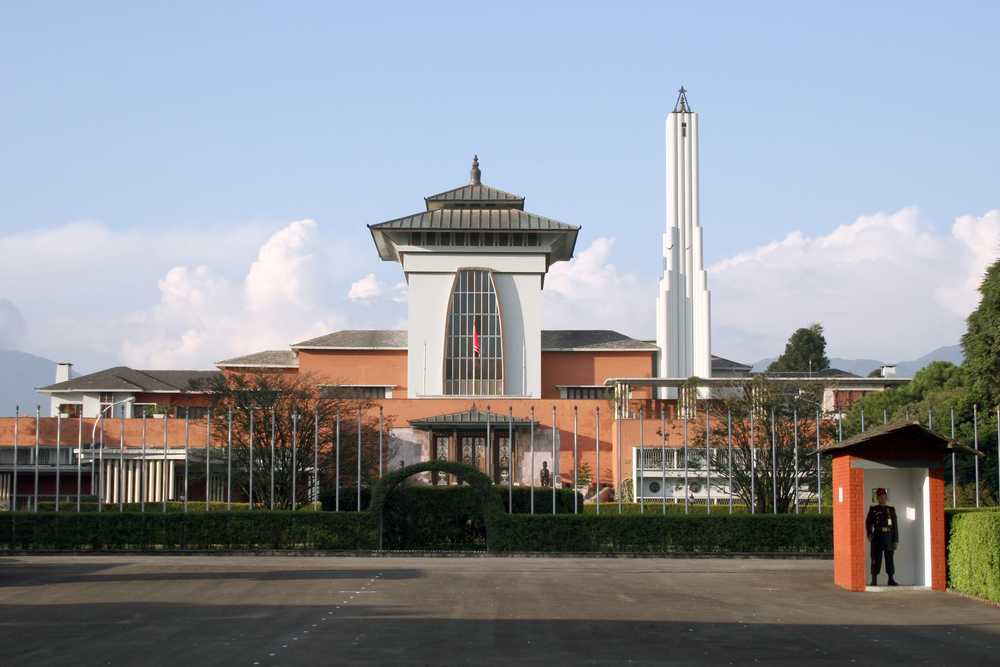 'Hiti' means 'river spout' in Newar Language, which is to the east of the main gate in the palace precincts, a landmark that figures prominently in the local legends.

The royal palace is known to have been the home to several former kings and queens.

Ownership of the location of the palace changed many times before royalty inhabited it. During the early Shah era, the Shreepali Basnet family occupied the site.

On 19 September 1846, Fateh was killed in the Kot massacre, and his family were expelled or banished from Kathmandu. Colonel Ranodip Singh Kunwar, Jung Bahadur Rana's brother, took over the property and palace, moving into Choutaria 's residence after limited renovations.

The building was restored after Ranodip became prime minister in 1877, and enlarged into a luxurious multi-wing palace.

Ranodip was murdered in the southern wing of the palace after the coup d'état on 22 November 1885.

Bir Shumsher Jang Bahadur replaced Ranodip Rana as Prime Minister and took over the palace. Bir Shumsher ordered the demolishing of the old palace in 1886, and a new one designed by the architect Jogbir Sthapit as a residence for his son-in-law, King Prithvi Bir Bikram Shah.

Colonel Surya Jung Thapa, an architect, was responsible for overseeing maintenance and improvements that added a new entrance and grand staircase.

In 1963, King Mahendra ordered the destruction of the palace and its reconstruction. The new palace was designed by the Indian-born American architect Benjamin Polk.

The Nepalese types of architecture were used to create a national symbol. However, the building ceased in 1969. On 27 February 1970 Griha Pravesh (a housewarming party) was performed for Crown Prince Birendra's wedding.

In 1972, Mahendra sold the palace for NPR some seventy million (seven crores) to the Government of Nepal. He claimed the estate was the dowry of his paternal grandmother Queen Divyeshwari.

Crown Prince Dipendra assassinated numerous members of the royal family in the palace on 1 June 2001, before killing himself. King Birendra and Queen Aishwarya were amongst those killed.

2006's Revolution and Reuse as a Museum

Following the Revolution of 2006, the Nepalese monarchy was abolished. Narayanhiti was vacated on 11 June 2008 by the last King, Gyanendra.

The former royal palace was later used to house the new Palace Museum in Narayanhiti. In October 2018 the royal crown jewels were showcased.

Narayanhiti Palace has exactly 52 rooms called Sadan and is named after 75 of Nepal's districts. The palace interiors are based on Late Victorian style.

Mahendra and King Birendra along with Shah Monarchs' life-size portraits throughout the stairs by artist Amar Chitrakar.

Gaurishankar Gate opens up to Kaski Sadan, and it is in Kaski Sadan that Shah Monarchs of Nepal gave the political audience and the ceremony of the oath of prime minister and heads of constitutional bodies for the Kingdom of Nepal is held.

The Gorkha Baithak Throne Room is the centre of the palace. It stands just above Kaski Baithak.

It is beneath this high ceiling that the Kingdom of Nepal Throne was placed. It is this room where the monarch gave the royal Royal Proclamation on special occasions.

On the right of the Gorkha Baithak, is Dolpa Sadan. It was used as the room for the royal family's uninvited guests to view Gorkha Baithak's proceedings through a one-way mirror.

The Naraynhiti Durbar was open to the public during Dashain festival where the former Kings offered darshan and teeka to the government officials, high-level officials, and to the general public.