The Pashupatinath Temple is a renowned and holy Hindu temple complex situated on the banks of the Bagmati River, around 5 km northeast of Kathmandu in the eastern part of Nepal 's capital city, Kathmandu. The temple serves as the abode of Pashupatinath, an incarnation of Lord Shiva.

In 1979 this temple complex was listed on the register of UNESCO World Heritage Sites. This "extensive Hindu temple complex" is a "sprawling array of temples, ashrams, photographs and inscriptions built over the centuries along the outskirts of the holy Bagmati River" and is listed as one of the seven monument categories in the Kathmandu Valley category by UNESCO as a visit here.

Around this two-storied temple, several other temples have been built over time. These include the Vaishnava temple complex with 14th-century Rama temple and the Guhyeshwari temple mentioned in a manuscript dating back to the 11th century.

Myths behind the start of Pashupatinath Temple

Yet according to Nepal Mahatmaya and Himvatkhanda, here the Mahadeva acquired immense popularity as Pashupati, the God of all Pashus who are both alive and non-living.

There are several legends which explain how Lord Aalok Pashupatinath's temple came into being here. A few of them have been described below:

As per Gopalraj Aalok Vamsavali, the oldest ever chronicle in Nepal, Prachanda Deva, a Licchavi King, founded this temple. He was the monarch 39 generations before Manadeva (464-505 AD) according to the stone inscription installed by Jayadeva 11 in Pashupatinath 's courtyard in 753 AD.

Legend has it that Lord Shiva and Goddess Parvati assumed the shape of an antelope once and wandered unknowingly in the forest on the eastern side of the Bagmati river.

Then, the gods picked him up and took him by one of his horns, causing him to assume his sacred shape. The fractured horn was revered as a Sivalinga but was buried and destroyed over time.

Centuries later, shocked herdsmen found one of his cows showering milk on land. Digging deep down at the location, he found Pashupatinath 's sacred linga.

The chronicle notes that Pashupatinath Temple was in the form of Linga shaped Devalaya until Supuspa Deva constructed a Pashupatinath five-storey temple in this location. When time progressed, the need emerged for this temple to be restored and renovated.

It is learned that a medieval king called Shivadeva (1099-1126 AD) restored this temple. Ananta Malla later refurbished it, adding a roof to it.

This shrine, also known as 'The Temple of Living Beings,' is a host to thousands of visitors from all around the globe.

Many complicated tales include Pashupatinath's roots. In short, one myth goes that Shiva and Parvati came to the Kathmandu Valley and slept while on a trip to the Bagmati.

Shiva became so fascinated by nature and the nearby trees that he and Parvati became deers and moved through the wood. Several spots in the Valley of Kathmandu have been known as places where Shiva went as a deer during his time.

The citizens and gods started looking for Shiva after some time. They eventually discovered him in the forest after numerous problems, but he declined to surrender.

Further confusion arose, however, in the end, Lord Shiva revealed that he will now be recognized as Pashupatinath, Lord of all creatures, as he had existed by the Bagmati river in the shape of a deer.

Rumours have it that any individual that beholds the lingam and prays will not be born again as an animal.

The wish-fulfilling cow Kamadhenu is reported to have taken refuge in a cave on mountain Chandravan. Kamadhenu went down to the spot where the lingam was sunken in the soil every day and spilt her milk on top of the dirt. 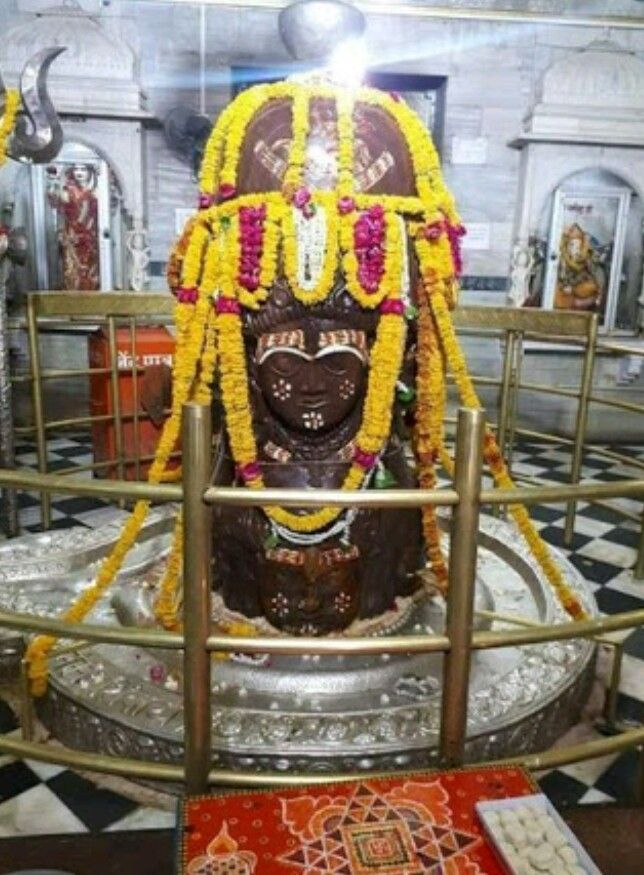 After a few thousand years, some people every day saw Kamadhenu pouring milk at the same location, and started to think about what that might be.

So they drained the dirt, discovered the lovely shiny lingam and started to worship it.

This principal temple is constructed in the architectural style of the Nepalese pagoda. All the characteristics of pagoda form are seen here like cubic constructions, finely crafted wooden rafters(tundal) on which they are to rest.

The two-stage roofs are made of gold-coated copper. The temple stands on a square foundation platform, and the height between the base and the foundation is 23 m 7 cm.

The temple has four main doors, each lined with sheets of silver. This temple has a peak of gold in it (Gajur).

Within are two outer and inner Garbhagrihas. The inner sanctum sanctorum (garbhagriha) is where the deity is positioned, and the outer sanctum is a room like an open road.

The sacrosanctum, or the central deity, is a Mukhalinga stone with a silver yoni foundation connected along with the silver serpent. The lingam is precisely one meter high and has four faces facing in four directions.

That face has tiny protruding hands carrying on the right side rudraksha mala and the other side a kamandalu.

Entry and Darshan at Pashupatinath Temple

The temple protection (Armed Police Force Nepal) and the Pashupati Area Development Trust of the Pashupatinath region are selective about who is permitted to access the inner courtyard.

Practitioning South Asian diaspora Hindus and Nepali and Tibetan diaspora Buddhists are authorized only into the temple courtyard.

Practising Western descent, Hindus are not allowed to reach the temple complex and must travel no farther than any non-Hindu tourists.

Sikhs and Jains are given an exception; because they are of Indian descent, they are permitted to access the temple complex.

Some visitors are allowed to gaze at the main temple from the opposite side of the river and have to pay a minimal charge of $10 (1000 Nepali rupees) to access the hundreds of tiny temples in the temple complex 's exterior premises.

The central temple courtyard stays accessible for the devotee from 4 am to 7 pm. Still, the Central Pashupatinath Temple where Lord Pashupatinath's Lingam is built is available for the morning ritual, and observation from 5 am to 12 pm and for evening ritual from 5 pm to 7 pm.

Unlike certain other Saiva temples, devotees are not authorized to reach the innermost premises of Garbhagriha but are allowed to watch from the outer premises of the Garbhagriha outside.

The adjustment in the closing hours of the temple depends on the season. In November, it closes at 6.30 pm. Moving forward, it closes early if light fades early.

Note: The temple has a tradition of paying admission to white people and excluding white citizens from other places, even though the white individual is a Hindu.

During the year there are numerous festivals, and thousands of participants visit such festivals. The two popular holidays are the annual Maha Shiva Ratri Bala Chaturthi, and the holiday Teej.

Teej is among Pashupatinath Temple's most popular festivals. The Hindu Nepali women praise it for long existence, their husband's joy.

Taking fasting on that day is assumed to allow a close connection between the husband and wife. Pashupatinath Temple is expected to be with the most massive crowd on this day.

The temple buildings and street plan were used in the Commandos 2 Men of Bravery in one step of the war game; "Target: Burma."

Though the game was set in Burma, comparisons have been made to Gurkhas, Nepali national soldiers.

Other notable temples inside the Pashupatinath Temple Complex

The temple complex of Pashupatinath occupies 0.64 hectares of land including 518 temples and monuments. There is a massive Nandi bull statue in bronze, in front of the western entrance.

The central pagoda-styled temple is situated in the protected courtyard within the compound guarded by Nepal's semi-military Police and Nepal National Army. It has a police outpost along with living quarters inside.

Outside the main courtyard

For more information on temples in Nepal, please visit hopnepal.com.