Langtang National Park is best known as Nepal's first Himalayan national park. It is the country's fourth-largest national park and spreads over 1,710 km sq of land which are all part of the Sacred Himalayan Landscape.

The main attraction of the park is the Gosaikunda Lake which lies at an elevation of 4,300 m and is of religious significance to the followers of Hinduism. The national park houses some of the world's highest mountain peaks like Langtang Lirung (7,234 m), Langtang Ri (7,205 m), and Dorje Lakpa (6,966 m).

The conservational area lies in the districts of Nuwakot, Sindhupalchowk, and Rasuwa in the central Himalayan region of Nepal.

It shares its international border with Qomolangma National Nature Preserve of Tibet while in Nepal it is bounded by the Trishuli River and Bhote Koshi river. The southern border of the park lies at a distance of 32 km from the capital city.

The recreation centre lies in apex being the gathering point between Indo-Malayan and Pale-ice domains which decorated with the significant biological systems of the two realms as the preservation need.

How to reach Langtang National Park?

We can reach the conservational by taking a private taxi or a local bus from Kathmandu to Dhunche and Syarbu.

The Langtang National Park was established after receiving the royal approval of Nepal's monarch in 1970. The park was gazetted in 1976 and was the first conservational area lying in the Himalayas.

The elevation of the park starts from 2000 m and exceeds more than 6,450 m. The conservation area is recorded to have over 70 glaciers of different sizes, the Ganesh Himal and Langtang mountain ranges.

It is an alpine freshwater lake situated at the height of 4,380 m in the Rasuwa district. The oligotrophic lake covers a surface area of 13.8 ha.

Together with other lakes in the national park, the Gosaikunda Lake complex comprises of about 1,030 ha.

The place is of religious significance to Hindus. It is referred to as the home of Lord Shiva and Goddess Parvati.

The Hindu scriptures like Ramayana, Mahabharata, Bhagavata Purana, and Vishnu Purna all talk about this place and dates it back to time of Samundra Manthan.

The lake is said to have been created by Shiva who struck the mountain with his Trishul to draw water so that he could his quench his thirst after drinking the Kalkut Bish (poison).

Thousands of pilgrim goers from Nepal and India visit this place during Janai Purnima and Gangadashahara.

The wildlife area experiences a wide variety of climatic zones ranging from subtropical to alpine.

The Langtang Valley mostly experiences the southwest summer monsoon. The temperature in the national park varies with the altitude of the region.

The conservational area receives its annual rainfall between June and September. However, the days are warm and sunny during April, May, October, and November.

During spring the rainfall above 3,000 m usually turns into snowfall. Winter lasts from December to March, where the days are clear and mild while the nights are almost close to freezing.

Vegetation and Habitat of Langtang

About 25% of the Langtang Valley is covered with thick forests. The park is ladened with deciduous trees like maple and oak, evergreen trees like pike, and several varieties of Nepal national flower, Rhododendron.

The original inhabitants of the Langtang region are believed to be straight descendants of Tibetans from Kerung who married the Tamangs residing in the Helambu region.

The people residing in the Langtang National Park are mostly Tamang and Tibetan whose culture dates back to many centuries. The primary occupation of the people in the village is agriculture, livestock raising, and trading. The major crops of the region are wheat, potato, maize, millet, and soybean. 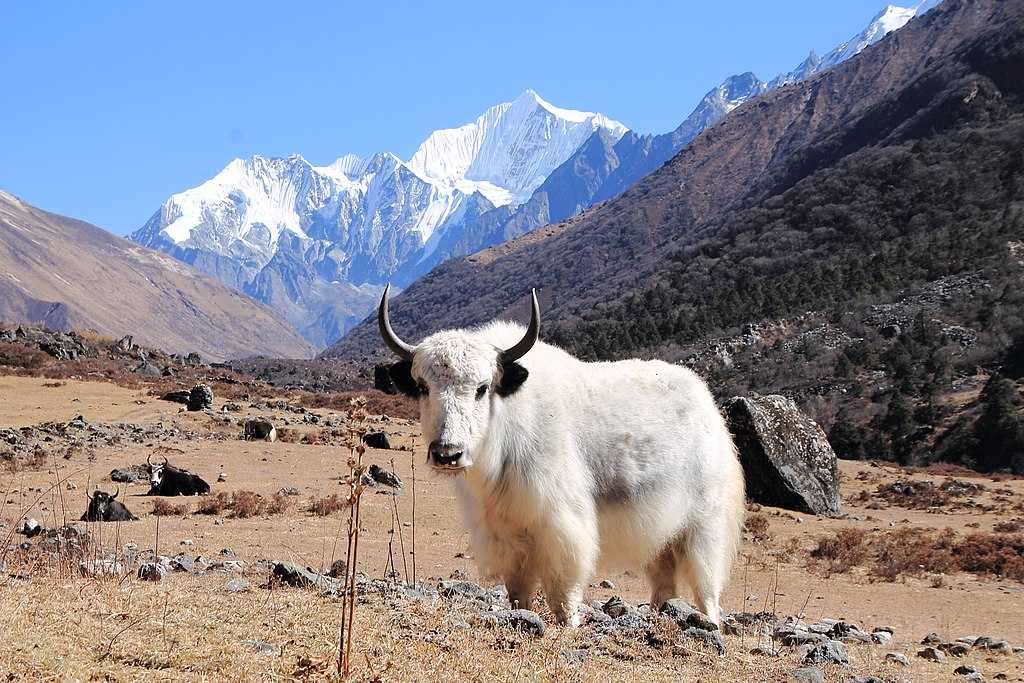 The grasslands of Langtang Valley are natural grazing grounds for animals like Himalayan tahr and musk deer. Other animals like the Himalayan Black bear, red panda, wild dog, ghoral, snow leopard, and Assam macaque are also found in the wildlife reserve.

Besides animals, the national park is also known to have recorded the flight of 250 different species of birds.

The park offers three trekking routes for tourists; Langtang Valley Trek, Helambu Trek, and Gosaikunda Lake trek which cover most of the southern Helambu region and the national park.

While on the trek you can visit places like Ghora Tabela, Kynajin Gompa, Melamchighyang, Tarkeghayang, Shemathang, and Ganja La Pass. All these routes offer facilities for hotels and teahouses.

Mishaps at the Langtang National Park

On 31st July 1992, an Airbus A310 carrying 113 people crashed into the park. The Thai Airways International Flight 311 was on its way to the Tribhuwan International Airport situated in Kathmandu.

The Langtang village was destroyed by an avalanche which was followed by the earthquake of April 2015. The death toll in the park exceeded 310, which included 176 residents, 80 tourists, and ten army personnel. Over 100 were never discovered.

Things to do in Langtang National Park