Nyatapola Temple in Bhaktapur, Nepal is a five-storeyed Hindu temple which is popularly known as Pancha Taale Mandir. The Five Storeys Roofed Temple was erected by then King Bhupatindra Malla during 1702 BC.

The temple was built during a short duration of seven months and is the holy abode of Goddess Siddhi Lakshmi, the Hindu goddess of wealth.

Where is the Nyatapola Temple?

The Nyatapola Temple lies in the Bhaktapur district of Nepal. Bhaktapur is one of three towns located not far from the capital city of Kathmandu in the Kathmandu Valley, Nepal. 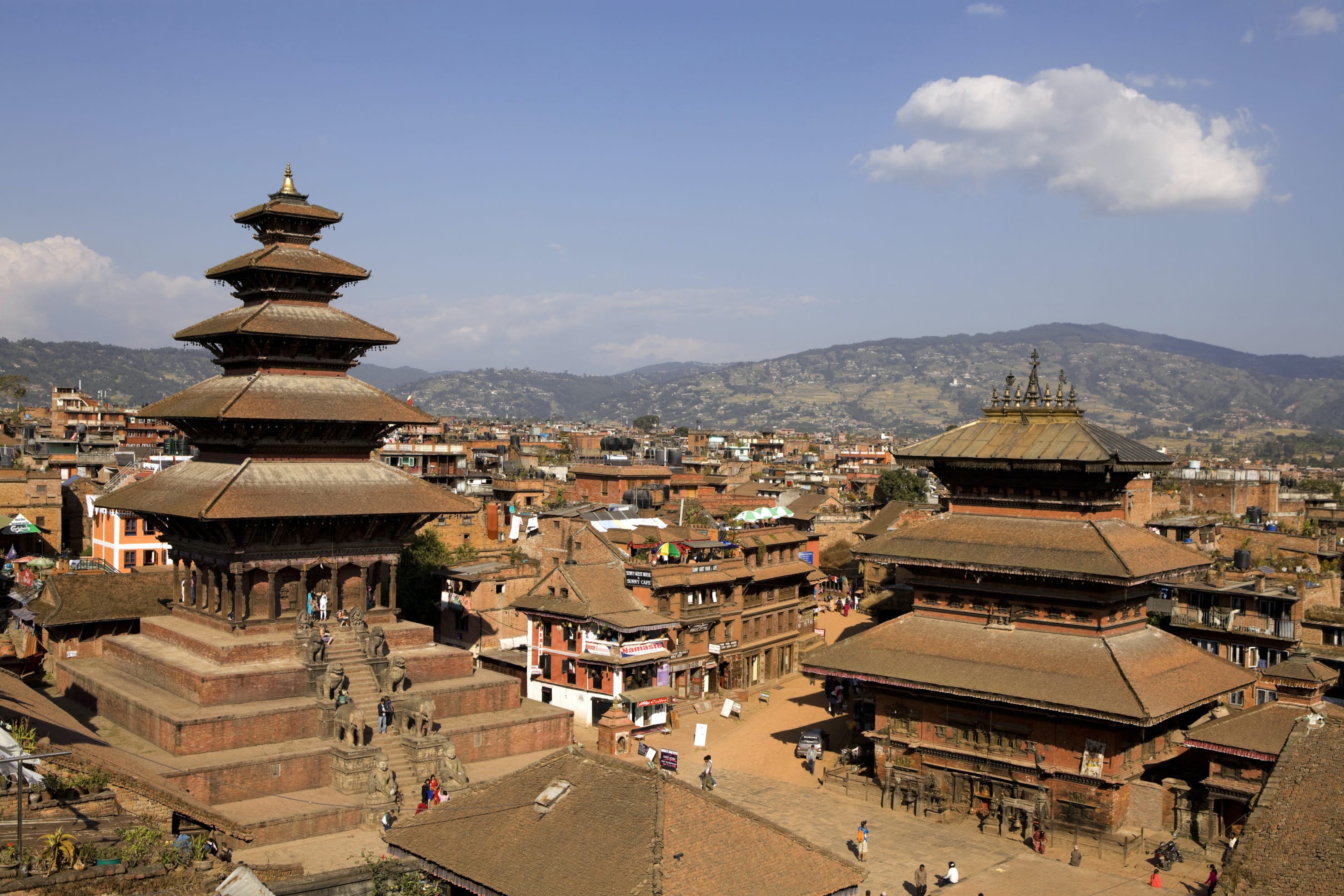 The name Bhaktapur means "City of Devotees." Today this historic, medieval city, dating back to the fifteenth century, is part of the UNESCO World Heritage site, which preserves buildings that are generally of cultural and environmental significance.

One temple that still survives today is the Temple of Nyatapola, founded in 1702 A.D. under the reign of King Bhupatindra Malla of the Malla dynasty.

This beautifully sculpted structure is considered one of the country's tallest pagodas and is a magnificent example of the enormous artistry that went into these buildings.

This five-story temple can be reached by walking up a flight of stairs that leads to the peak of the tower, with a five-tier roof that rises just over thirty meters wide. When you move up these terraces, you can find sculptures on each side of you, at each level.

Legend speaks of the days when the Lord Bhairava, the Hindu deity of death, created chaos in the society during 1,078 AD. The Temple of Bhairava stood on Taumadhi Street.

King Bhupatendra Malla ordered guardians to be positioned in pairs on each level of the base leading up to the Nyatapola Temple, to make the brick and wood temple strong and stable.

On the first base of the pagoda, there is a pair of statues of the strongest man in Bhaktapur, a famous wrestler by the name Jaya mal Pata. 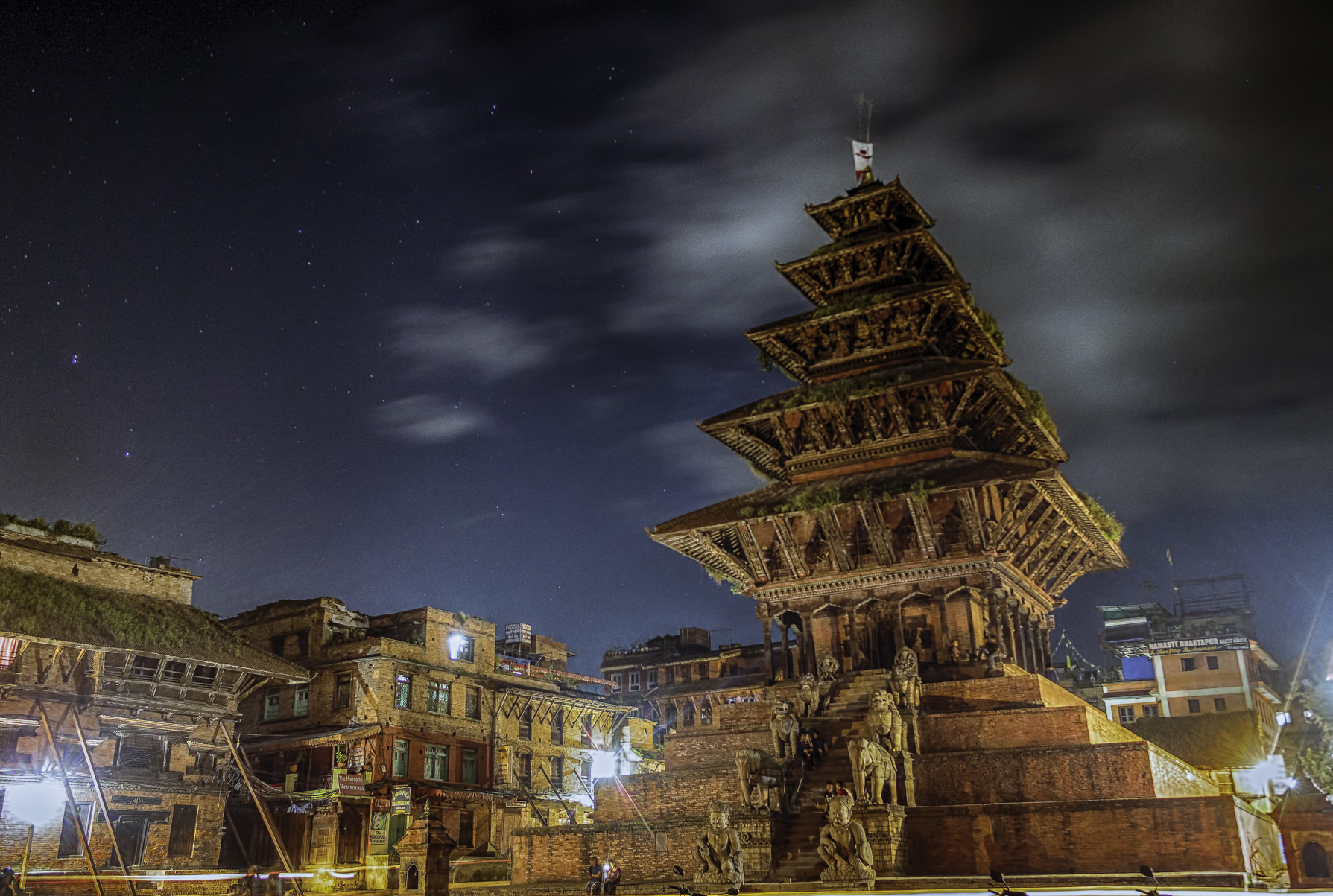 Soon there were two elephants accompanied by two tigers, two griffons and eventually "Baghini" and "Singhini," goddesses of the tiger and the horse. Justice flourished in the region after the goddess defeated Bhairaba.

The temple is the Kathmandu Valley's highest temple, which rises 30 meters high. It was built so right it defied the Nepal – Bihar earthquake of 1934.

Within the temple, the portrait of Siddhi Lakshmi is locked and only the priests are permitted to join in worshipping her.

The five-storeyed temple, locally known as Nyatapola, is elegant and renowned Nepalese temple, standing in Bhaktapur on the northern side of Taumadhi Street.

It is the only temple called for the design aspect, rather than the name of the god living inside. King Bhupatindra Malla built the temple during a brief the span of fewer than five months in 1701/1702 A.D.

Under the present work-schedule, preparation, and programming sense, it is challenging to imagine that the temple was built during that small period.

The fascinating facts regarding Nyatapola's construction were discovered when moving through the text of Siddhagni Kotyahuti Devala Pratistha. The name of the manuscript has kept enthusiasts from knowing it about the subject of ancient architecture behind the curtain.

From the beginning of digging the foundation to the completion of the roofing, the task took about eighty-eight days. Foundation construction work lasted for seven days.

Construction of six plinths was then undertaken. That was accomplished within thirty-one days, and the erection of the superstructure began immediately after that.

This was also done within thirty-four days, during which roofing work began from top to bottom. All five roofs were completed in seventeen days, paving them with mini-tiles (Jhingati).

Then they had to wait for an auspicious day in the sanctum sanctorum to install the icons and repair the pinnacle on top of the building. The construction workers waited 38 days for this. The auspicious fire-sacrifice (Siddhagni Kotyahuti Yajna) had been going on meanwhile.

The text is printed in yellow Nepalese paper with Harital (orpiment) coated in the Newar language.

From the moment the construction began, it was designed in just 17 months. According to the record book of King Bhupatindra Malla, the house was constructed in only seven months with the aid of other neighbouring groups such as Challing, Jitpur, Bagshowari, Shakhu, Jhaukhel, Changu, Gokarna, and Paunati, to name a few.

His empire had a dispute with Kritipur and Kantipur, the western neighbours, and so he constructed the magnificent building to demonstrate his strength.

It was designed at a period when planning was ongoing for the Taj Mahal in India. He also claimed that he had constructed seven brick factory for bricks and carried all the raw materials in advance. The greatest obstacle was getting a massive rock from Challing that is approximately 9 km from the temple.

Eventually, after the completion of the Nyatapola Temple, the King invited all the neighbouring kings and civilians for a pompous feast.

There were around 23,000 participants at the feast; four times as many as the Bhaktapur community. It was published in a book that Dr Janak Lal Vaidya discovered.

Implication of the 2015 Earthquake

Despite being the tallest Shikhara temple, the Bhairav kale survived the 2015 earthquake. However, several other temples around Bhaktapur's vicinity were destroyed during the earthquake.

The Nyatapola temple had also survived the earthquake in Nepal – Bihar in 1934 which destroyed many other temples.

The temple of Nyatapola was built and devoted to the goddess Siddhi Lakshmi or Siddhi Laxmi, giving the Nepalese a place to worship her.

Like so many of the other temples, even the priests retain the image of the goddess that is found inside the temple of Nyatapola.

The Temple of Nyatapola occupies Taumadhi Square, a five-tiered pagoda devoted to the Hindu goddess Siddhi Lakshmi. The temple stands on a five-level foundation with four Ganesh shrines at each intersection. In Newari language, Nyatapola means "five-story building."