Rishi Panchami is the fifth day, the next day after the day of Ganesh Chaturthi in the Lunar calendar month of Bhadrapad. It is a typical Sapta Rishi worship. The seven sages – Kashyapa, Atri, Bharadwaja, Vishvamitra, Jamadagni, Gautama Maharishi, and Vashishtha is better known as Saptarishis are worshipped on this day.

The festival occurs on the fifth day of Shukla Panchami, the month of Bhadrapada (August-September). The term "Rishi" refers to the sages while "Panchami" means the fifth day. Rishi Panchami is observed in some regions of Kerala, India as Vishwakarma Puja.

The festival is dedicated to the Saptarishis — namely Kashyapa, Atri, Bharadwaja, Vishvamitra, Gautama Maharishi, Jamadagni, and Vashishtha — who were created by Lord Brahma to teach the community.

They passed enlightenment on to humanity so that it would pursue the road of truth, grasp the fundamental values of goodness and become enlightened. 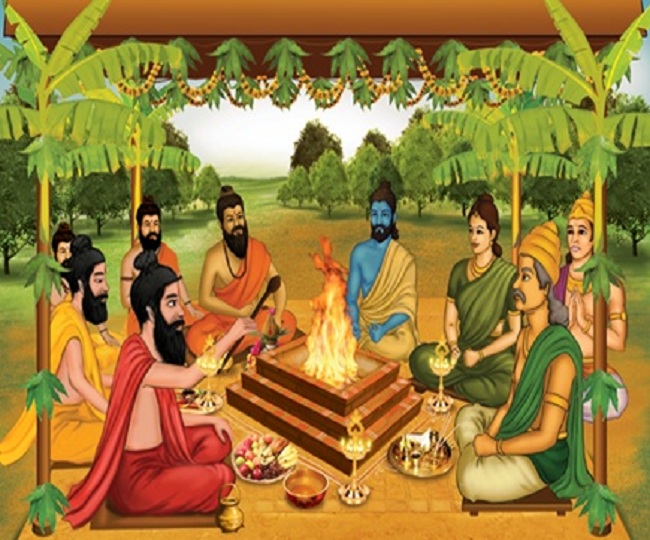 It is assumed that if a person follows quickly and conducts rituals on this day, he or she is forgiven of all the sins of the current or past existence.

The festival is observed primarily by women, who practice a fast and conduct puja to pay homage to the seven great sages.

As the story goes, there was a king called Sitasale who begged Brahma to tell him about a pace that could liberate one from all past life sins.

Brahma told him a tale about Brahmana named Uttak. While in the state of 'Vidarbha' the Brahmin called Uttak used to live with his wife with whom he shared a son and a daughter.

Uttak married his daughter in a prosperous and reputed Brahmin family. But as time passed on, the girl's husband dies a premature death; and she becomes his widow, and on this basis, she returns to the house of her parents.

The widow's body was infested with worms/parasites over her entire body amid a beautiful day. The sorrow saddened them after finding her tainted body and brought her father to Uttak Rishi to figure out what had happened to their baby.

The rishi further added that the girl had handled the utensils in her household even after during the rajasla- mahavari (menstruation period). Therefore she got the worms covering her entire body because of this unwittingly done sin.

A ritual bath is taken in holy rivers, ponds or other masses of water at Rishi Panchami. On this day are worshipped, Lord Ganesh, Navagraha(nine planetary gods), Saptarshis (seven Sages) and Arundathi, the mother of the Gods. The women worship the Gods by offering the 'Prasad,' and washing the feet of their husbands.

The citizens show reverence, appreciation and remembrance in this vrata (fasting) for the great deeds of those ancient Rishis. The latter dedicated their lives to the welfare of humanity. Women are to observe the fast.

Women practice this fast and request salvation for the mistakes made during their time of menstruation. Some Dadheech Brahmins and even the Agrawal and Maheshwari groups of

Rajasthan also celebrates Rishi Panchami as Raksha Bandhan or "Rakhi festival." Sisters attach "Rakhi" or "Sacred Cord" and brothers and sisters pray for each other's well-being and pledge to preserve every other.