The conservation area covers an overall area of 7,629 sq km and contains the Annapurna I (8,091 m), Tilicho Lake, and Kali Gandaki River Valley, better known as the world's deepest valley.

The protected area stretches into the districts of Manang, Mustang, Myagdi, Lamjung, and Kaski districts of mid-Nepal. The geographical coordinates of the region are 28.78°N 83.97°E.

The area is bordered by the deserts of Mustang Valley and Tibet in the north and valleys and foothills of Pokhara Valley in the south.

In the east of the Annapurna region lies the Marsyangdi Valley and in the west flows the Kali Gandaki River.

How can we reach the Annapurna Conservation Area?

The protected area lies close to the tourism capital of Nepal, Pokhara, which can be easily reached by air or by land. 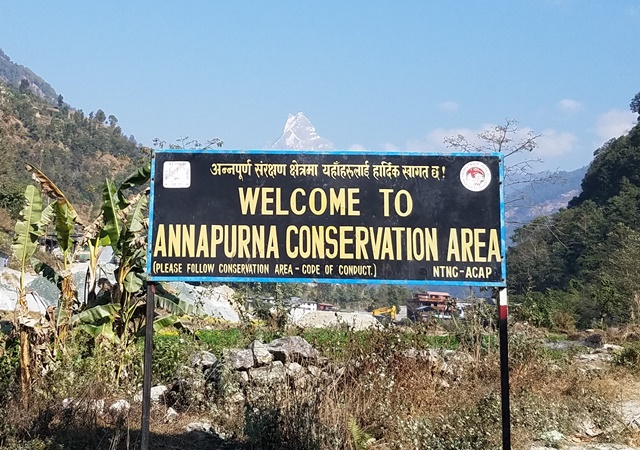 From Pokhara, you can hire a private cab/taxi or a take a bus to Jomsom that lies on the northern side of the conservation area.

It was later gazetted as a conservational area in 1992 and covered 55 VDCs with its current size.

Climate in the Annapurna Conservation Area

The area experiences two climatic regions at an elevation of 1,000 m to 8,000 m over an area of 120 km. The southern part of the region experiences heavy rainfall as compared to the northern side.

The monsoon season between June and September brings heavy rainfall of 5,032 mm in the southern slopes where the elevation is 2,760 m. The rain shadow areas in the northern region receive 1,099 mm of rain at about 2,950 m.

Many features make the Annapurna area a unique location in the world. It houses the deepest gorge in the world; the Kali Gandaki Gorge which measures about 3 miles in length and about 1.5 miles in width. The valley consists of Fossils from the Tethys Sea which dates back to 60 million years ago and is of archaeological importance.

The forests near Ghorepani area is considered the world's most massive rhododendron jungle. The Tilicho lake in Manang, north to the Annapurna massif is the world's highest altitude freshwater lake.

Annapurna region is also rich in biodiversity and is home to over 1,226 species of flowers, 105 kinds of mammals, 518 varieties of bird, 40 reptiles, and 23 species of amphibians.

The Annapurna region is the first conservational area that has allowed people to live and own property within its boundaries.

The locals residing in five districts in the 15 rural municipalities within the ACA. The northern region is populated with people of Loba, Manange, and Thakkali ethnic groups while the Gurungs and Magars dominate the south.

Brahmins and Chettris are also present in the region but fewer numbers. Each of these ethnic groups speaks their own distinctive language and follow their own traditions.

Buddhism is the dominant religion, while there is also some Hindus present.

The natural scenic beauties and the cultural diversity has made the ACA the most favoured trekking destination of the nation. The Annapurna region is flooded with both inbound and outbound tourists all over the year.

Over the years the people have accepted tourism as their primary source of income and is the most important economic sector in the region. Over 158,589 foreign tourists visited the Annapurna region in 2017.

There are more 1,000 teashops, lodges, hotel and other services for the accommodation of the vacationer and pilgrims visiting this region.

The National Trust for Nature Conservation doesn't receive any funding from the government to operate the Annapurna Conservational Area Project.

However, they have been granted permission to collect entry fees from trekkers and vacationers who visit this region. The money raised is used for the welfare and conservation of the natural resources and the local community.

Donations and funds are also raised from national and international donors to support the project's development and conservation efforts.