One of the famous holiest temples in Kathmandu, Nepal is Guhyeshwari Temple, sometimes called Guheswari or Guhjeshwari Temple. This Hindu temple is dedicated to the worship of Goddess Adi Shakti or Guhyeshwari.

The temple is also a Shakti Peetha and is situated about 1 km east of the Temple of Pashupatinath, on the southern side of the Bagmati River. For Hindus, it's a famous pilgrimage destination, especially for Tantric worshipers.

Nepal's King Pratap Malla founded the temple during the 17th century. The name of the Guhyeswari Temple comes from the Sanskrit words of Guhya (secret, hidden, or cave), and Ishwari (goddess).

The word "Guhyeshwari" stands for the cave's goddess, and the term's root aligns with Sati's Hindu myth, her self-immolation as she transforms into Adishakti, the goddess of divine strength, at Daksha Yagya.

The legend of Daksha Yagya and the self-immolation of Sati had tremendous importance in defining ancient Sanskrit literature, which influenced India's society.

It led to the development of Shakti Peethas' concept, thereby reinforcing the Shaktism. His wife Sati Devi became so furious when Shiva became humiliated by his father in law (i.e., Daksha) that she leapt into the yagya flames (a rite containing sacrifices to a holy fire).

Shiva became grieved and picked up her corpse and started walking about while pieces of her carcass dropped to the ground. There are 51 Shakti Peethas assumed to be blessed with Shakti's existence owing to the dropping of body pieces of Sati Devi's dead form, as Lord Shiva held it and walked in despair in Aryavartha.

The 51 Shakti Peethas contains 51 Sanskrit script letters as well. Some Hindus believe that the Guhyeshwari Temple shows the position where the hips or rear section of Sati are claimed to have collapsed. Sometimes, the word guhya is misunderstood for reference to the vagina.

Sati Devi's genitals are reported to have collapsed in Assam at another Shakti Peeth better known by the name "Kamarupa-Kamakhya."

Another story is that Guhyeshwari Temple marks the place where the goddess's knees are said to have collapsed. Every Shakti Peeth is devoted to a Kalabhairava(demon god) and a Shakti.

The 707th name of the goddess is listed in Lalitha Sahasranama as Guhyarupini. Another theory is that the name of Guhyeswari is from the secret 16th syllable of Shodashi Mantra.

In Guhyeshwari Temple, Mahashira is the Shakti, and Kapali is the Bhairava. The goddess is worshipped in a kalasha (water jar) at the centre of the temple which is covered with a coating of silver and gold.

The kalasha stands on a stone foundation that protects a deep natural source of water from which vapour oozes out of the foundation edges. 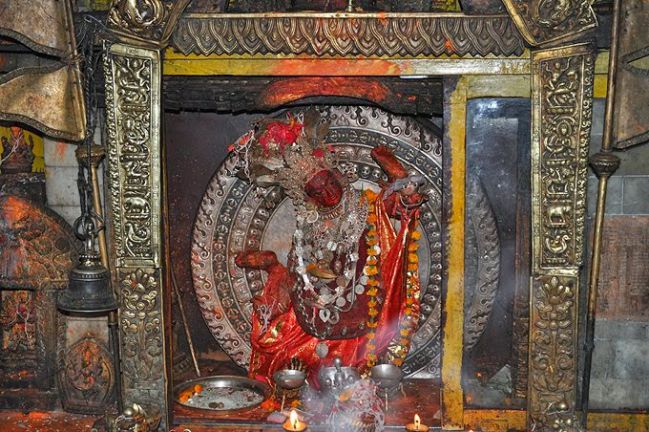 The Guhyeswari temple sits in the middle of a courtyard and is surmounted by four golden snakes that protect the final roof.

The shrine, in pagoda style, has a distinct interior. Rather than a rising Goddess image, it has a flat head parallel to the ground that is crowned by bowing down. The goddess Guhyeshwari's Vishwasorup depicts her with many hands and distinct coloured faced queen.

A pool, the Bhairav Kunda, lies next to the religious figure. Devotees place their hand within the pond and whatever they get is called sacred and embraced by the celestial as a gift.

The riverbank surrounding the temple is filled with Shiva shrines and octagonal bell-roofed pavilions for ceremonial bathing. The Guhyeshwari Temple is visited in before entering the main Pashupatinath Temple while visiting these temples. This is because of the assumption that Shakti is revered before Shiva.

Newari Vajrayana Buddhists regard Guhyeshwari as sacred to Vajrayogini in the form of Vajravarahi and as the position of the root of the legendary lotus on which Swayambhunath stupa rests, which is also the umbilical cord which nurtures Kathmandu.

The place is better known as Pakmo Ngülchu in Tibetan language (Womb Fluid of Varahi). The water in the temple well that runs from the spring is assumed to be vaginal blood, presumably amniotic fluid, or Vajravarahi wash.

The former Kings of Nepal joined by his families worshipped here during the Navrathri festival after taking a holy bath in the Bagmati. The temple has multiple values about it.

Devotees from around Kathmandu come to worship Goddess Guhyeshwari during the first ten days of Dashain (Navaratri), the Hindus' most significant festival. 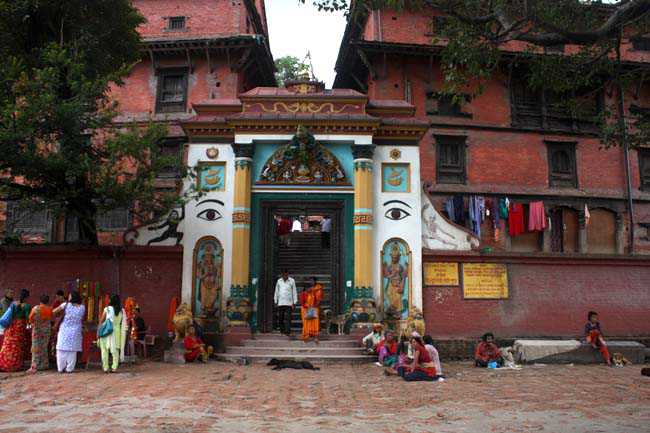 During this festival, a lot of emphases is put on attending this temple. During this period even sculptures of various types of Durga (Hindu Goddess) are installed around the Guhyeshwari Temple.

Guhyeshwari Yatra is another famous festival, during which a tour starts from the temple than to Pashupatinath Temple and finishes at Hanuman Dhoka, Basantapur. This practice has been widespread since the early days.

Tantric practitioners worship this temple, and Tantric rituals are conducted in that building. The temple is also mentioned in the Hindu scripts like Kali tantra, Chandi tantra, and Shiva tantra Rahasya. This Guhyeswari temple is considered to be one of the most appropriate places to attain tantra control. 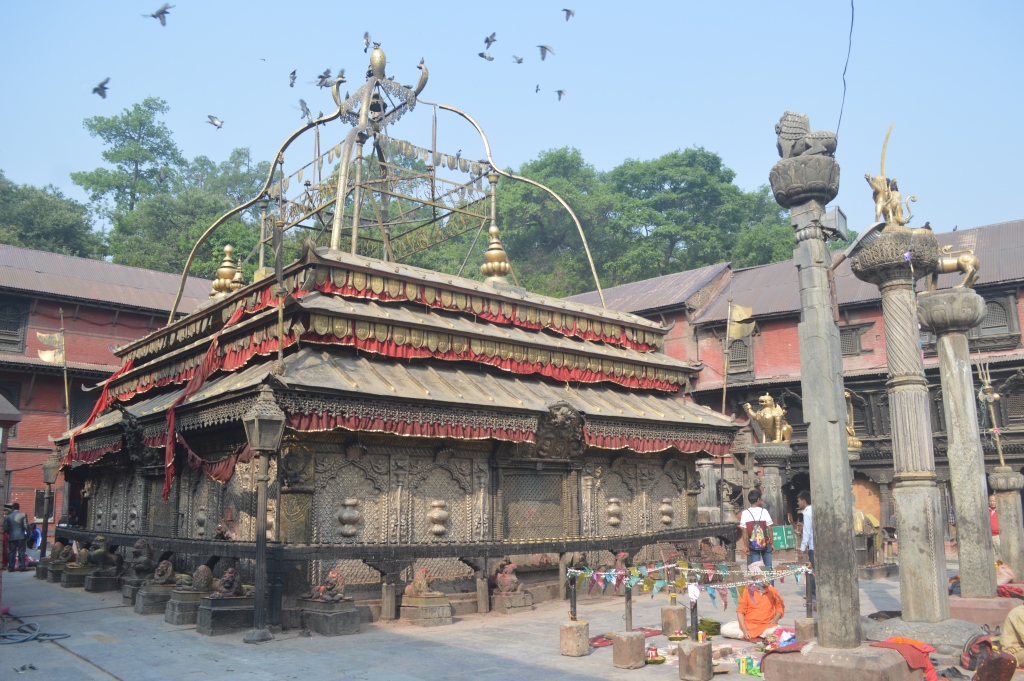 It is assumed that if a marriage takes place in the temple of Guhyeshwari, the spouses would be friends of the soul for another six births. Sati (goddess) married Shiva on her next rebirth and was reborn as Parvati.

Things to do while in Guhyeswari Temple