Kathmandu Durbar Square or Basantapur Durbar Kshetra in front of the Kathmandu Kingdom's ancient royal palace is one of three Durbar squares inside the Kathmandu Valley in Nepal, all of which are granted the recognition of UNESCO World Heritage Sites.

The Kathmandu Durbar Square was home to the Malla and Shah kings' palaces who ruled the city. It is also called as Hanuman Dhoka Durbar Square, a name derived from a statue of Hanuman, Lord Ram's monkey devotee, at the palace entrance.

Where is Kathmandu Durbar Square?

Kathmandu Durbar Square lies in the Basantapur area of the Kathmandu Valley. Durbar Square (royal palace) is surrounded by the magnificent architecture of the Newar artists and artisans whose talents over many decades are beautifully demonstrated.

Several buildings in the Square collapsed on 25 April 2015 as a result of a devastating earthquake.

Built initially on Dattaraya square, the Royal Palace was later relocated to Durbar square. The Kathmandu Durbar Square held the Malla and Shah kings' palaces which ruled the city. The square circles quadrangles along with some palaces, temples, and courtyards.

The preference for building the royal palaces at this site dates back as early as the third century Licchavi era. However, the Kathmandu Durbar Square has gone through numerous renovations throughout history and minimal remains from the Lichavvi dynasty.

When Late Prithvi Narayan Shah invaded the Kathmandu Valley in 1769, he favoured having his palace on the Kathmandu Durbar Square.

Many predecessing Kings of the Shah dynasty managed to govern Nepal from the Square until they relocated to the Narayan Hiti Palace in 1896.

Although no written archives depict the history of the Kathmandu Durbar Square, Sankharadev (1069–1083) is credited with building the palace in the Square.

King Ratna Malla is said to have built the Taleju Bhawani temple on the north side of the palace in 1501 as the first king of the independent city of Kathmandu.

No historical inscriptions clearly state the construction of the Kernel Chok; though, it is probably the oldest of all the courtyards in the Square. 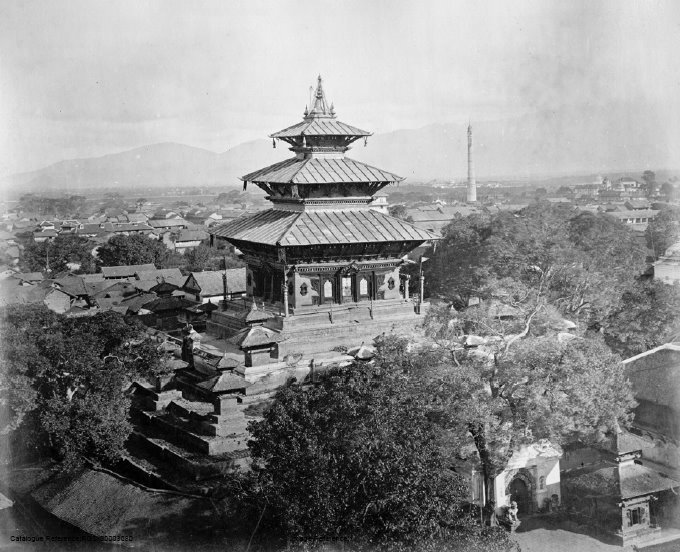 The Bhagavati Temple, formerly known as the Narayan Temple, rose above the surrounding mansions and was built in the early eighteenth century during the Jagajaya Malla phase.

The Narayan idol inside the temple was stolen, so Prithvi Narayan Shah replaced it with a Bhagavati image, completely transforming the temple's name.

The Square's oldest temples are the ones that King Mahendra Malla (1560–1574) built. They are Jagannath temples, Kotilingeswara Mahadev temples, Mahendreswara temples and Taleju temples.

Built in 1564, in a distinct Newari architectural style, this three-roofed Taleju Temple is elevated on platforms that form a pyramid-like structure. It is said that Mahendra Malla was extremely devoted to the Taleju Temple when he lived in Bhaktapur.

The Goddess, satisfied with his dedication, provided him with a dream telling him to create another temple for her on Durbar Square in Kathmandu. He designed the temple with the help of a hermit to give it its present form and the Goddess is believed to have entered into the temple in the disguise of a bee.

The only constructions to have occurred during this three-generation time were the establishment by Siva Simha of the Degutale Temple dedicated to Goddess Mother Taleju and some other instalments by Laksminar Simha in the Royal Palace.

A significant part of the Kathmandu Durbar Square was built during the reign of Pratap Malla and under the rule of the Shah Dynasty.

The Square was extensively developed during the reign of Pratap Malla. A passionate builder, he immediately began expansions to his royal palace after his coronation as a king, and rebuilt some old temples and built new temples, shrines, and stupas around his kingdom.

He installed a small entrance in a traditional Newari design when constructing his palace. The door was elaborately adorned with god carvings and drawings and auspicious marks and was eventually moved to Mohan Chok's entry.

He placed Hanuman's statue opposite the entrance, with the belief that Hanuman would strengthen his infantry and protect his kingdom.

The entrance Pratap Malla built, lead to Nasal Chok, the courtyard in which most royal activities such as coronation, concerts, and yagyas, rites of holy fire, are performed. He commissioned the building of Mohan Chok in the palace in 1650.

For many years, this chowk remained the royal residential courtyard and is believed to store a large amount of treasure under its surface.

Also about this time, Pratap Malla built Sundari Chok. He made a three-roofed temple of Agamachem in Mohan Chok and a unique temple with five superimposed roofs.

He donated Mul Chok to the adjacent Taleju Temple after a complete restoration. In 1670 he gave metal doors to the main Taleju temple. He restored the Degutale Temple founded on the palace square by his grandfather, Siva Simha, and the Taleju Temple.

He built a Shiva temple and called it Indrapura, near his palace on the road, as a replacement for the Indreswara Mahadeva temple located in the distant village of Panauti, Bhaktapur.

The King built another pavilion at the southern area of the Square, near Kasthamandap at Maru, and named it Kavindrapura, the poet king's mansion.

Pratap Malla placed an idol of dancing Shiva, Nasadyo, in this house, which is today highly adorned by dancers in the Valley. He set up a low-bath with a golden fountain at Sundari Chok.

Inside the palace, adorned with Nagakastha, a wooden serpent, he built a small pond, the Naga Pokhari, which is said to have ordered stolen from the royal lake on Durbar Square in Bhaktapur.

He restored stone sculptures including the Jalasayana Narayana, the Kaliyadamana, and the Kala Bhairav belonging to the Licchavi dynasty. An idol of Jalasayana Narayana was installed in the east wing of the palace in a newly built pond in the Bhandarkhal area.

Pratap Malla channelled water from Buddhanilkantha to the freshly built pond in Bhandarkhal as a substitute for Jalasayana Narayana's idol in Buddhanilkantha.

The Kalyadana is placed in Kalindi Chok, which is adjacent to the Mohan Chok, a manifestation of Lord Krishna destroying Kaliya, a water serpent. The approximately ten-feet-high image of Kal Bhairav being terrifyingly portrayed is placed near the Jagannath Temple. This image is the focus of chok worship, particularly during Durga Puja.

The Kathmandu Durbar Square witnessed numerous instalments and renovations during the Shah dynasty. In fact, two of the most unusual temples in the square complex was built during this era; the Nautale Temple and Vasantapur Durbar. History states that Prithivi Narayan Shah built this two buildings around 1770.

Rana Bahadur Shah donated the head of Swet Bhairab close to Degutale Temple during the festival of Indra Jatra in the year 1795.

In 1908 a palace was built using European architectural designs, called Gaddi Durbar. The Gaddi Durbar is entirely covered in white plaster, held by Greek columns, and is attached to a large audience hall, all of which are foreign to Nepali architecture.

After the destructive earthquake in 1934, several portions of the Square such as the Hatti Chok near Kumari Bahal in the southern region of the Square were demolished during restoration.

Other additions to the Square

Jayaprakash Malla, the last king of Malla dynasty to rule over Kathmandu Valley, built a temple for Kumari and Durga called the Kumari Bahal.

Kathmandu's Durbar Square is better known as the Hanuman Dhoka Palace Complex, which until the 19th century was the royal residence of Nepalese rulers, and where important ceremonies such as the Nepalese monarch's coronation took place.

The palace is decorated with elaborately carved wooden windows and panels and houses the Museum of the King Tribhuwan Memorial and the Mahendra.

The State Rooms inside the palace can be visited. Temples and palaces on the Square have passed through reconstruction time and time again after being damaged by natural causes or neglect. Now the Square has less than ten quadrangles.

The temples inside the Kathmandu Durbar Square are preserved as national heritage sites, and the palace serves the purpose of a national museum. Only a handful of the parts of the palace are open to visitors, and the Taleju temples are open to Hindu and Buddhist faiths only.

The Kumari Chok is one of the unique attractions in Nepal, at the southern end of Durbar Square. This gilded cage houses the Raj Kumari, a girl selected to become the earthly an embodiment of the Hindu mother goddess Durga by an ancient and magical selection process.

During the Indra Jatra festival, she takes a tour of the city, and she is carried around from one place to the other in her royal chariot during those festivals. Also, during a few other festivals, she makes public appearances; otherwise, her devotees can visit her and worship her for a fee. If the Kumari refuses to let you pray her, it's said doom is upon you.