Although the complex comprises of at least four distinct squares (Durbar Square, Taumadhi Square, Dattatreya Square, and Pottery Square), the whole region is classified informally as Bhaktapur Durbar Square. This historical palace is a frequently visited location in the Kathmandu Valley.

There are many temples inside the Bhaktapur Durbar Square compound. Some of them have been described below:

In Newari-language nyatapola means five tales-the representation of five fundamental components. It is Nepal's most significant and tallest pagoda ever constructed with such architectural elegance and creative grace.

The floor of the temple is said to be extended from its middle. The temple is accessible once a year to the public, during the festival of Dashain. The temple is devoted to Shiddhilaxmi the Goddess.

Those statues lined up on the two sides of the staircase are built as guardians of the temple and the presiding goddess, which we can see in five layers from the base of the temple. It is said that it took over three generations to complete the Nyatapola temple. The five-storeyed temple is famously known as "Pancha Tale Mandira."

Rameshwar Temple, in front of Gopi Nath Temple, which is a Gum Baja design, is the first time one sees on the right of the entrance. This is an accessible temple devoted to Shiva, with four pillars.

The term Rameshwar comes from the fact that it was Ram as a manifestation of Vishnu who got the first Mahadev temple founded in South India at Rameshwar Temple.

The Gopi Nath Temple, attached to the Rameshwar Temple which houses the three deities Balaram, Subhadra, and Krishna, are two roofed pagoda form.

The deities are hard to see because the door stays entirely locked. The temple is also identified as Jagannath, another form Vishnu takes. Dwarka, also known as the Temple of Krishna, houses three deities, left to right: Satyabhama, Krishna, and Radha.

The images are set in cement. The deities are mounted in a palanquin in the month of Mangsir (November / December) and carried around the city.

The Vatsala Devi Temple is just in front of the Bhaktapur Durbar Square and adjacent to the King's head statue, and next to the Taleju Bell.

This temple in Shikhara architecture is wholly constructed in sandstone and is designed on a three-stage plinth, sharing parallels with Patan's Krishna temple. 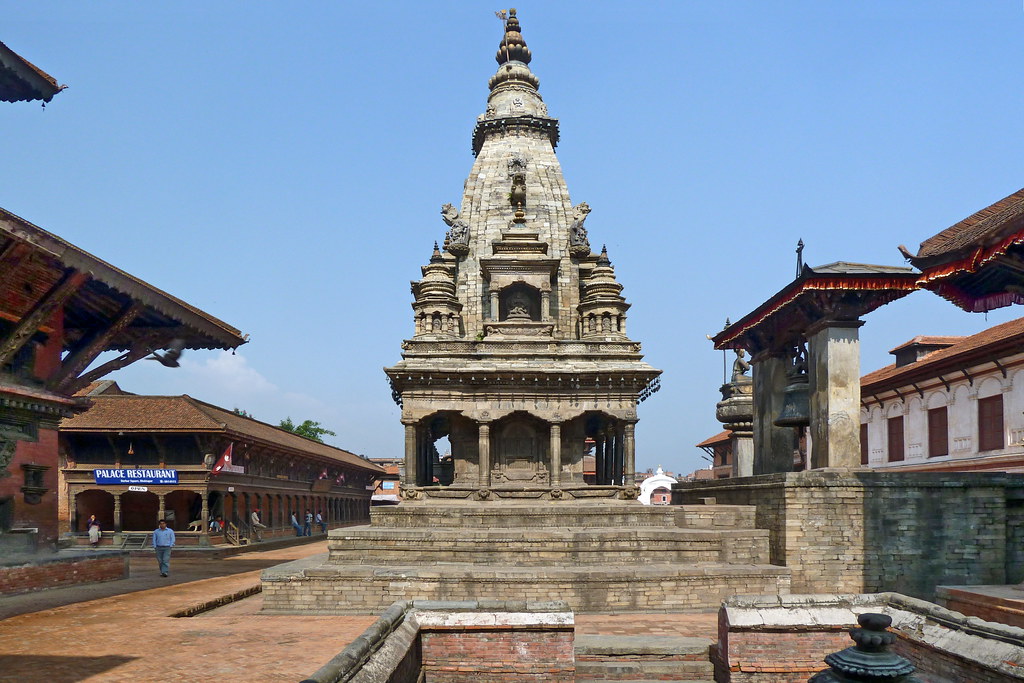 It is devoted to Vatsala Devi, a form of the Durga goddess. King Jitamitra Malla originally founded this temple in 1696 A.D.

However, the construction that can be seen today was restored by King Bhupatindra Malla during the late 17th or early 18th century. Behind the Vatsala Devi temple is a water source called Dhunge Dhara and next to it stands the Chayslin Mandap.

The temple built of Shikara type terracotta is the Temple of Kedarnath (Shiva).

A tiny temple inside the Bhaktapur Durbar Square is locally known as Badri Narayan and lies to the west of the Gopi Nath Temple. This temple is devoted to Lord Vishnu and Narayan.

The Temple of Bhairab Nath is devoted to Bhairava, Lord Shiva's fiercest incarnation.

It is assumed that the holy god Shiva temple, the mini Pashupati, was constructed right in front of the Durbar Square after a Bhadgoan king thought about it.

One of these depicts a pair of elephants copulating, in the missionary position: Kisi (elephant) Kamasutra.

Structure of the Bhaktapur Durbar Square

The Bhaktapur Durbar Square houses the 55-window palace designed by King Jitamitra Malla and used to be home to royalty until 1769. Today, it's a regional museum.

Entrance to the temple is prohibited, and a clear image of the living goddess can not be taken. The Durbar square is surrounded by beautiful architecture and beautifully shows the Newari artists and craftsmen's talents from many nations.

Initially, on Dattaraya street, the Royal Palace was relocated much later to the site of Durbar Square.

Besides temples, there are also many other attractions inside the Bhaktapur Durbar Square that make it the most visited place in the Kathmandu Valley. They are:

'The Fifty-five Windows Palace" was constructed during the reign of Malla dynasty King Bhupendra Malla who reigned from 1696 to 1722 AD. The castle was still not complete until 1754 AD during his son Ranjit Malla's reign.

During the act of worship, one can see the image of King Bhupatindra Malla on a column facing the durbar square. This is known to be the most beautiful of the many sculptures on the site.

"Lun Dhwākhā" is considered to be the world's most exquisite and richly moulded specimen of its kind. An image of the Hindu goddess Kali and Garuda (mythical gryphon) surmounts the threshold, and two celestial nymphs attend.

This is embellished with impressive intricacy with demons and other Hindu legendary beings.

Percy Brown, an esteemed English art critic and historian, described the Golden Gate as "the most magnificent piece of art in the entire Kingdom; it is positioned like a gem, shining countless facets in the stunning setting of its surroundings."

King Ranjit Malla built the gate, and it is the gateway to the central courtyard of the fifty-five windows palace.

The majestic and exquisite gate was designed by craftsmen whose hands were reported to have been cut by the envious Bhadgoun King upon completion so that no more of these masterpieces could be replicated.

One may appreciate a pair of multi-armed sculptures of the awful god Ugrabhairab and his companion Ugrachandi, the formidable incarnation of Shiva's consort Parvati, near the main gate at the west end.

The statues of Ugrachandi and Ugrabhairab date back to 1701 A.D, and the poor sculptor is believed to have his hands chopped off afterwards, to keep him from duplicating his masterpieces.

Ugrachandi has eighteen arms carrying firearms, so she is in a spot to destroy a (Buffalo) demon by chance. Bhairab bears twelve swords, and both god and goddess are garlanded with human head necklaces.

The gateway to the National Gallery of Art is flanked by the image of Hanuman, the monkey king, who poses as the four-armed Hanuman Bhairab in Tantric shape. Hanuman is decorated with power and dedication.

Durbar Square was severely destroyed in 1934 by the earthquake and hence appears to be more spacious than the squares in Kathmandu and Patan.

Initially, 99 courtyards were connected to this building, but now only six remains. Before the earthquake of 1934, there were three different temple groups. The square is still encircled by structures that escaped the disaster.

On 25 April 2015, several buildings were further destroyed by another major earthquake. The main temple in the square of Bhaktapur lost its roof during the natural calamity. The Vatsala Devi temple was also demolished during the time.