Patan Durbar Square in Patan is situated in the heart of Nepal's city of Lalitpur. It is one of the three Kathmandu Valley Durbar Squares which are also granted the status of UNESCO World Heritage Sites. The area sustained heavy losses from the April 2015 earthquake.

Patan Durbar Square is an architectural masterpiece of Newar. The square floor has red bricks tiled to it, and the region boasts of many temples and idols. The ancient royal palace where the former Malla Kings of Lalitpur resided is one of its attractions.

The story behind Patan Durbar Square isn't quite understandable. Although the previous Malla Kings of Lalitpur are credited with the royal square being established, the site is known to be an ancient crossroads.

The Pradhans who lived in front of the Mallas around the site has links to Durbar Square. Some chronicles suggest the Thakuri Dynasty built a palace and reformed the locality, but there is little evidence of this.

The scholars are sure that since ancient times Patan has been a prosperous city. The Kings of the Malla dynasty made significant improvements to the old city.

Much of today's architecture is from the 1,600s, designed during King Siddhi Narsingh Malla and his son Srinivasa Sukriti's reign. Purandarasimha, Sivasimha Malla, and Yoganarendra Malla are some of the prominent Malla Kings who improved the square.

Patan is one of the cities with its roots in Buddhism. It is a Hindu and Buddhist centre with one hundred thirty-six bahals or courtyards, and 55 main temples. Most of those structures are in the Durbar Square vicinity.

The original temples are positioned parallel to the palace's western side. The temple entrance faces to the east, to the castle.

There is also a bell positioned next to the major temples in the alignment. The square also includes old residential houses in Newari design.

Krishna Temple is Patan Durbar Square's most significant temple. It was designed in the local variety of Shikhara architecture called Granthakuta.

Perhaps prominent are the stone carvings around the beam between the first and second-floor pillars. The first-floor pillar carvings narrate the Mahabharata incidents, while visual carvings from Ramayana are projected on the second level. 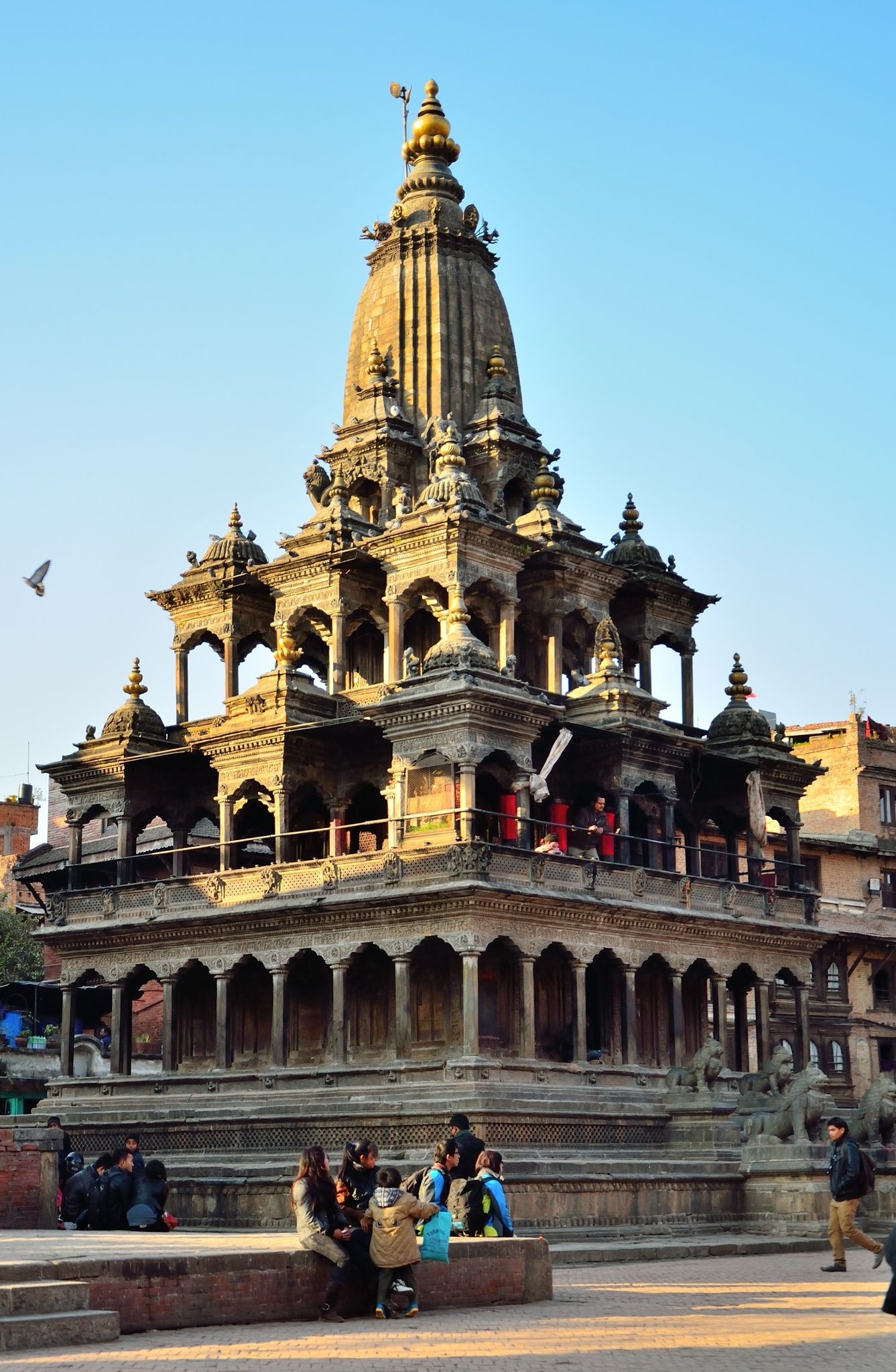 King Siddhi Narsingh Malla erected the temple in 1667. It is claimed that one night the King saw Lord Krishna standing in front of the royal palace, with his consort Srimati Radha.

He ordered to create a temple on the same site. The temple features 21 golden pinnacles beneath which are three stories of the temple.

The first floor holds Lord Krishna's main shrine at each side with shrines of Radha and Rukmini. The second floor is devoted to Lord Shiva and the third to Avalokiteshvara (Lokeshwor).

Throughout Krishnastami the square is packed with thousands of Hindu pilgrims and devotees.

The Taleju temple was founded in 1640 by Siddhi Narsingh Malla and restored in 1667 after a fire by Srinivasa Malla.

The personal god of the Malla kings was Taleju Bhawani. It is a five-storey temple with triple-roofs. Gopala kings' chronicle of the 14th century suggests a Taleju temple was founded before the Mallas by the Pradhanas.

In 1680 Srinivasa Malla founded Bhimsen Temple. The temple is renowned for its three golden windows which are interconnected.

In Mahabharata, Bhimsen is regarded as a great personality. He had been considered to be brave and optimistic. He is traditionally revered in Newa as a god of business and commerce. Tourists are not allowed inside the building.

The Temple of Vishwanath is dedicated to God Shiva. It was established during Siddhi Narsingh Malla's rule, in 1627. Across the other hand of the sanctuary is a bull's head, a vessel for Shiva. Within the temple, a stone linga is enshrined.

Design of the Patan Durbar Square

Mul Chowk, Sundari Chowk, and Keshav Narayan Chowk are the three central courtyards inside the building.

In addition to these courtyards, the Patan Durbar Square complex boasts of magnificent temples, holy shrines and historical locations, all famed for their intricate carvings and a stunning show of ancient Newari architecture.

The central courtyard of the Durbar Square is Mul Chowk. Of the three significant chowks, it is the most prominent and most considerable courtyard. Vidya Temple is in the centre of the building, and Taleju temples stand around the courtyard.

On the southern side of the Patan Durbar Square, the doorway to the Taleju Shrine is marked by the statues of the river goddesses Ganga, on a giant tortoise, and Jamuna, on a carved makara (a mythical crocodile).

To the south of Mul Chowk is Sundari Chowk. It is built from a sunken tank that is known as Tusha Hiti. It's smaller than the Mul Chowk and open to the public now.

The stone guards the entrance to the chowk sculptures of Vishnu's man-lion form, Hanuman, Ganesh, and Nara Singha.

Sundari Chowk is mostly famous for its nightlife, and recently a gigantic self-illuminating moon is placed in the chowk, which has become an attraction for both tourists and locals.

Within the Patan Museum, north of Mul Chowk is Keshav Narayan Chowk. Keshav Narayan Temple is in the middle of this chowk and gives its name to the chowk.