The Garden of Dreams- Thamel, Kathmandu

The Garden of Dreams also known to some as the Six Seasons Garden is a neo-classical garden built-in 1920 in Kaiser Mahal Kathmandu, Nepal. It consists of 6,895 square meters (74,220 sq ft) of gardens with three pavilions, an amphitheatre, wetlands, pergolas, and urns, designed by Kishore Narshingh.

It lay in poverty from the mid-1960s, when its founder, Kaiser Sumsher Rana, died but was recently revived with the aid of the Austrian Government. Below we have talked about the features of the Garden of Dreams.

How can you reach the Garden of Dreams?

The Garden of Dreams is based on Tridevi Sadak between Thamel Marg and Kantipath. It is situated near the ever-popular Fire and Ice restaurant and next door to the Himalayan Java cafe.

It's a pretty quick 2-minute walk from Thamel but ask for directions if you get lost.

Architecture of the Garden of Dreams

In comparison to more casual and natural planting, the formal and axial design of the architectural features is a juxtaposition consistent with that of the gardens produced in England during the reign of Edward VII.

The Garden was designed in 1920 and its day was strikingly innovative, similar to other garden projects of the first quarter of the 20th century. The individual pavilions' architectural complexity indicates they've been influenced by pattern books, with slight local modifications.

Sunken flower gardens with large ponds at their core circle the planting areas along the circumference of the road.

History of the Garden of Dreams

Located in Kaiser Mahal, across the street from the former Royal Palace at the entrance to the tourist area of Thamel, the Garden became famous as the Six Seasons Garden built in early 1920 for Field Marshal Kaiser Sumsher Rana (1892–1964).

The Garden was considered one of the most elegant private gardens at the period, featuring a design influenced by the Edwardian style. 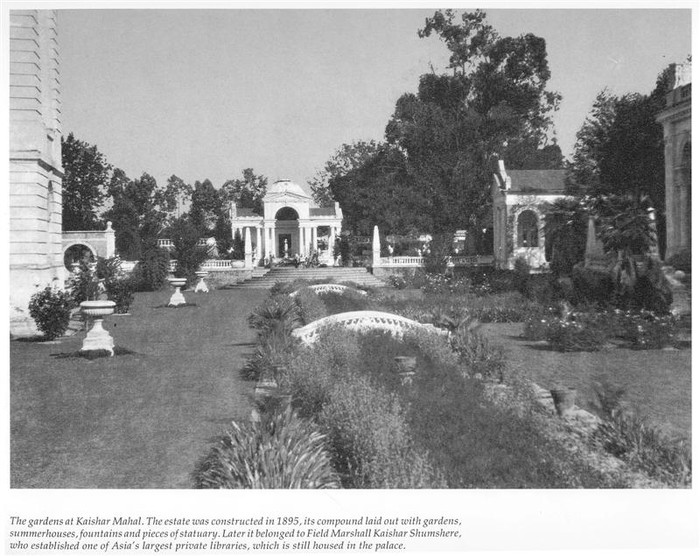 Pavilions, fountains, elegant garden furniture and European-inspired elements such as verandas, pergolas, fences, urns, and birdhouses are situated within the Garden walls. Each of the six pavilions providing architectural structure for the Garden is devoted to one of Nepal's six seasons.

The Garden was handed over to the Nepal government after Kaiser Sumsher's death, but it was not well maintained for decades. Just half of the main the garden is left intact today.

Renovations Inside Garden of Dreams

After decades of neglect resulting in collapsing pavilions, overgrown paths and destruction of the subtropical flora, restorations were undertaken between 2000 and 2007 in partnership with the Nepal Ministry of Education, with the help of Austrian Development Assistance (the Austrian Government).

Created by Eco Himal., the restoration scheme has become a blueprint for the preservation of other historic properties.

In its style and literary allusions, the Garden is connected to the collections of books on agriculture, architecture, and literature, in the library of Kaiser Shumsher.

Garden of Dreams among Visitors

The Garden has since been expanded, with the inclusion of new equipment, after the completion of the renovation. This stunning Thamel garden is extremely popular with tourists visiting Kathmandu.

Since most tourists reside in the Thamel district, after extensive sightseeing in the capital, this is something to admire off and the place to reach for some leisure time. It offers an oasis of peace and tranquillity in its revamped condition within the Kathmandu metropolitan bustle and continues to be a tourist icon.

Garden of Dreams has attracted tourists since it opened to their delight. Garden of Dreams is Nepal's ideology to set things into context as well as national heritage where the people can feel proud.

It has increased the quality of life of the Kathmandu Valley locals, as well as the visitors, are looking to invest. With its ambience and facilities, it refreshes and rejuvenates the mind, body and spirit.

Spending Time Inside the Garden of Dreams

There is a Kaiser Cafe, which is run by the company Dwarika. You may have some decent coffee time, and some books, of course. You can love having a family dinner with relatives.

There also are some spots around the garden where you can take cute and breathtaking photos. The garden's floral elegance and its spectacular aura is something you would like to participate in.

Even this location is an excellent room for some pictures and images. The culture and encouragement that the management offers you will make your work more profitable.

If you're searching for someplace to model photography in no time, the Garden of Dreams will have it all. With the antique charm of the garden and pavilions, you'll get a perfect room for the pictures.