Celebration of Gai Jatra in Kathmandu, Bhaktapur, Kirtipur, and Lalitpur

Gai Jatra is a festival observed by the people of Newar community of Nepal, often in the Kathmandu Valley. This Newari festival is celebrated in the month of Bhadra (August – September).

The date of Gai Jatra is fixed by the lunar Nepa and falls on the first day of the Gunla month's dark four-night. Today in this article, we talk about Gai Jatra and its celebration in places like Kathmandu, Lalitpur, Kirtipur, and Bhaktapur.

Why is Gai Jatra celebrated in Nepal?

The origin of Gai Jatra dates back to the time of the rulers of Malla dynasty. The Malla Queen is reported to have been in mourning for a long time after her son's untimely death.

Throughout an effort to comfort her, the king invited any family who lost a loved one to come out in a procession and reassure the queen who her pain was not alone. That is the primary reason there is a lot of fun and laughing passing down the streets during the procession.

In English, the term "Gai" means cow while "Jatra" means a rally or a procession. Throughout the Hindu tradition, the cow is considered as the goddess of riches.

Gai Jatra is a celebration of music, chanting, rejoicing and smiling. Throughout the Kathmandu Valley, the cow festival is conducted to mourn the demise of loved ones.

As part of the festival celebration, family members usually send their younger ones dressed up like cows for the street parade. The festival typically occurs in July or August.

Gai Jatra is a time to honour those missing and to relieve the grief. The real motive for celebrating this festival is exchanging of grief and having the consolation of realizing that their loved ones are free.

This Nepalese festival is mainly celebrated in places like Kathmandu, Bhaktapur, Kirtipur, and Patan.

The celebration of Gai Jatra has been passed down from generation to generation as time goes by, and as the kings and queens moved away.

People celebrate it with a lot of joy and other services in the central Kathmandu compared with those on Patan. To show the dedication to their loved ones, the procession goes through the city to various parts of the suburbs and metropolitan areas inside.

The people involved in the jatra get tiny packages of fruits, cookies, oats and other food products to help them enjoy the festival and their loved ones on their tour around the area.

Bhaktapur is considered to have the most fun and entertaining Gai Jatra because the city has its peculiarities as opposed to Lalitpur and Kathmandu in how the festival is celebrated. The Gai Jatra festival lasts eight days in Bhaktapur.

A chariot (known as Taha-Macha) made of bamboo wrapped in cloth, with a picture of the dead individual hanging in the middle, is navigated by the family along with localities along a predefined path. A large procession of chariots further accompanies the main chariot.

The Taha-Macha symbolizes deceased men, and their belongings and images are painted on the chariot. The chariot has a wooden frame that is usually covered in a cotton cloth for women with Hakupatasi (a typical black sari style female fabric), and men with plain sari style fabric.

The Taha-Machas are carried out from various Bhaktapur toles. Still, peculiarly, Lakolachhen's Taha-Machas are led by one big one that has the bamboo frame but is filled with straws.

This is called Bhailya Dya (Bhairab) preceded by Ajima (Bhadrakali) rendered at Khala (Ajima Dyo: Chhen). Many famous musicians ride in the lead of a chariot followed a traditional dance called Ghintang Ghisi.

Men are often seen dressed up as women in the Hakupatasi dress. People put on funny wear for the jatra, and face paintings and wearing masks are typical. The younger ones dress up as gods and participate in the march.

The Ghintag Ghisi dance is celebrated for nearly a week, starting from Gai Jatra to Krishna Janmashtami day. The dance takes place in a long line, with two people hitting each other's dancing sticks in a series.

For this festival, Patan in Lalitpur also has a similar kind of follow-up to that of Kathmandu but has less participation of citizens than at Kathmandu. 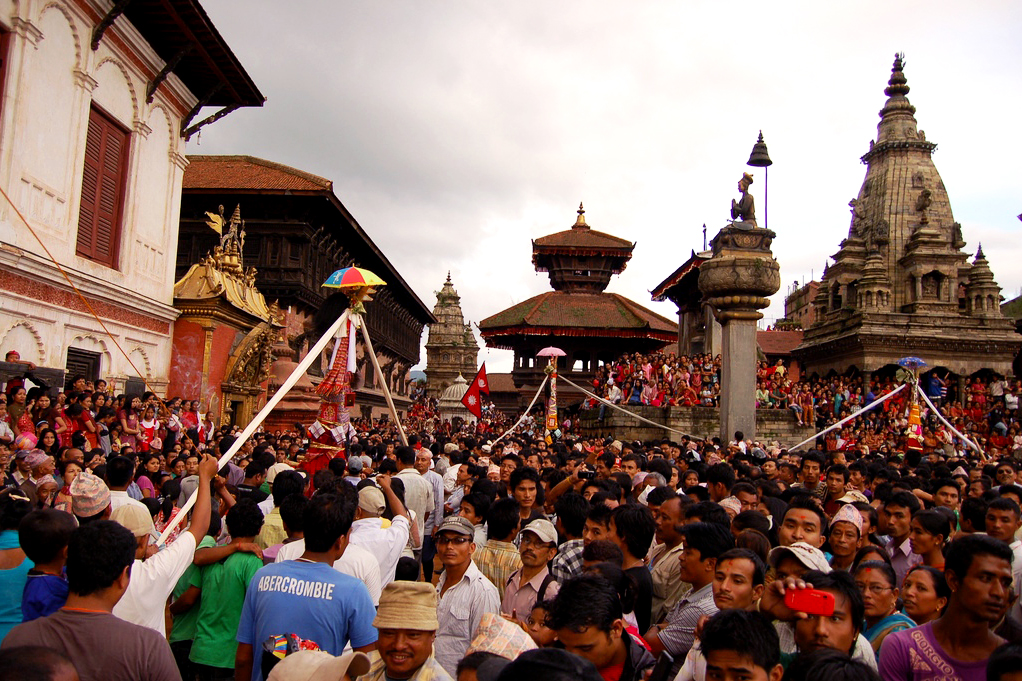 Residents of Lalitpur have another Gai Jatra-like festival called Matayaa which is accompanied by Hindu with much more commitment and citizens participation.

For this Matayaa, people's presence may be in thousands while Gai Jatra's procession is less exciting for people in Lalitpur.

Gai Jatra is commonly celebrated in Kirtipur, in particular in the ancient historic towns of Kirtipur; Kipu dey, Panga, Naga, Bhajanga, and Yarwocha(Itagol) and others.

The citizens celebrating in Kirtipur have multiple reasons to celebrate this festival and have a unique way to celebrate it. 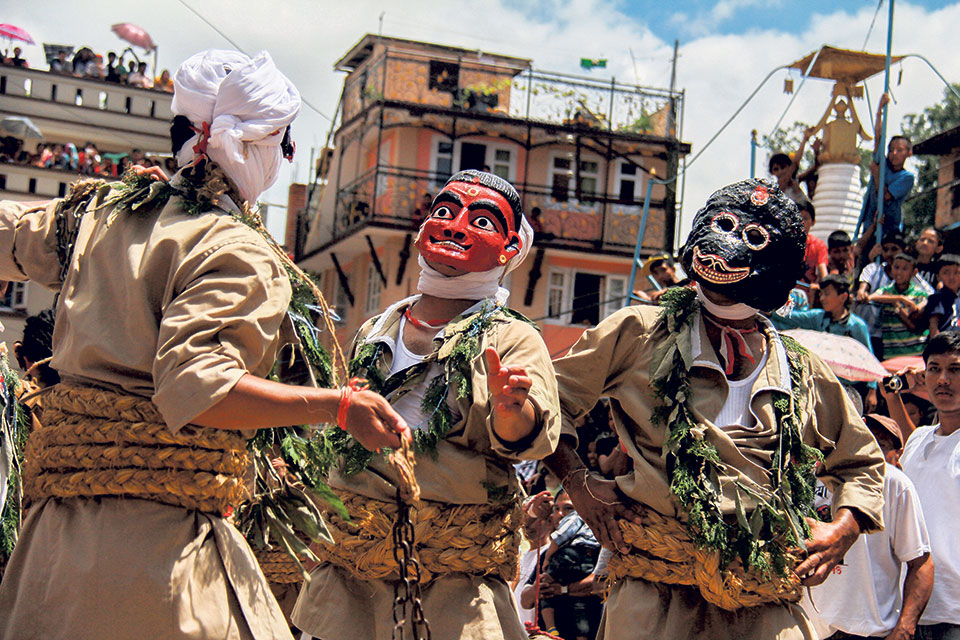 We walk across the city of Kirtipur, not dressing up like cows but dressed up in various types of gods and goddesses.

This festival is observed by citizens not only for their deceased ancestors but also for peace and unity between family members and the community itself.

During this month the town's farmers complete their work in the fields and head home to mark the conclusion of the tedious and challenging fieldwork.

We assemble leaders of the family and offer a feast celebrating their achievements. This tradition is repeated in the Kirtipur festival.

Men dress up as ladies and transgender people and ride around town. They travel from house to house calling up the house owners and telling them to come down and eat with them at the feast. This helps create unity between neighbours and leaders of the community.

Kirtipur performs a lot of dances with numerous imitating artists that offer people a lot of awe and joy. Kirtipur is filled with many views and legends regarding Gaijatra than every other valley town and has a more vibrant festival celebration.

For more information on festivals and their celebration in Nepal, please visit Hopnepal.com.