Chitwan National Park is best known as Nepal’s first national park which was established in 1973. The conservational area which covers an area of 952.63 square km (367.81 sq mi) was granted a World Heritage Site status in 1984.

The national park along with Valmiki National Park and Parsa National Park forms the Chitwan-Parsa-Valmiki Tiger Conservation Unit which spreads over an area of 3,549 km sq. In this article, we discuss all the features of Chitwan National Park.

Where does Chitwan National Park lie in Nepal?

The Narayani and Rapti river system forms a natural boundary to the Chitwan National Park’s north and western side. The Parsa National Park lies on its east while on the south lies Valmiki National Park.

Back in the 19th century Chitwan, also known as the Heart of the Jungle, was Nepal’s most favoured hunting grounds. Rhinoceroses, tigers, sloth bears, and leopards were found in abundance in the alluvial grasslands of Chitwan.

The grasslands in Chitwan extended over more than 2,600 km square in the 1950s and was home to over 800 rhinos. However, when the farmers moved from mid-hills to Chitwan Valley in search of farming lands, the area became open for settlement and hunting of these wild animals grew in numbers.

To ensure the protection of these rare endangered species, Nepal passed its first conservation law in 1957. Two years later Edward Pritchard Gee surveyed the area, at which point he suggested the creation of conservational space on the northern and southern side of the Rapti River.

Due to mass settlement of people from the mountainous regions, almost 70% of the jungle was cleared, and only 95 rhinos remained, by the end of 1960s. Thus to prevent the extinct of the rhinos Chitwan National Park was gazetted in 1970 and was finally established in 1973.

The conservational area covered an area of 544 km sq in 1973 but was increased to the present-day area 952.63 km sq in 1977. Further that year, a buffer zone of 766.1 km sq was added to the west and north of the Narayani-Rapti river system, and between the south-eastern border of the park as well on the international boundary to India.

What is Chitwan National Park famous for?

Chitwan National Park is home to several endangered animal species and other wildlife. It is a sanctuary to Royal Bengal tigers, the Great one-horned rhinoceros, sloth bears, gaurs, elephants and many others.

The alluvial floodplain habitat is best known for being one of the best tiger habitats in the world and is home to the endangered Bengal tiger. Since its establishment, the protected area showed a gradual increase in the tiger’s numbers from the initial 25 to over 70-110 in 1980. 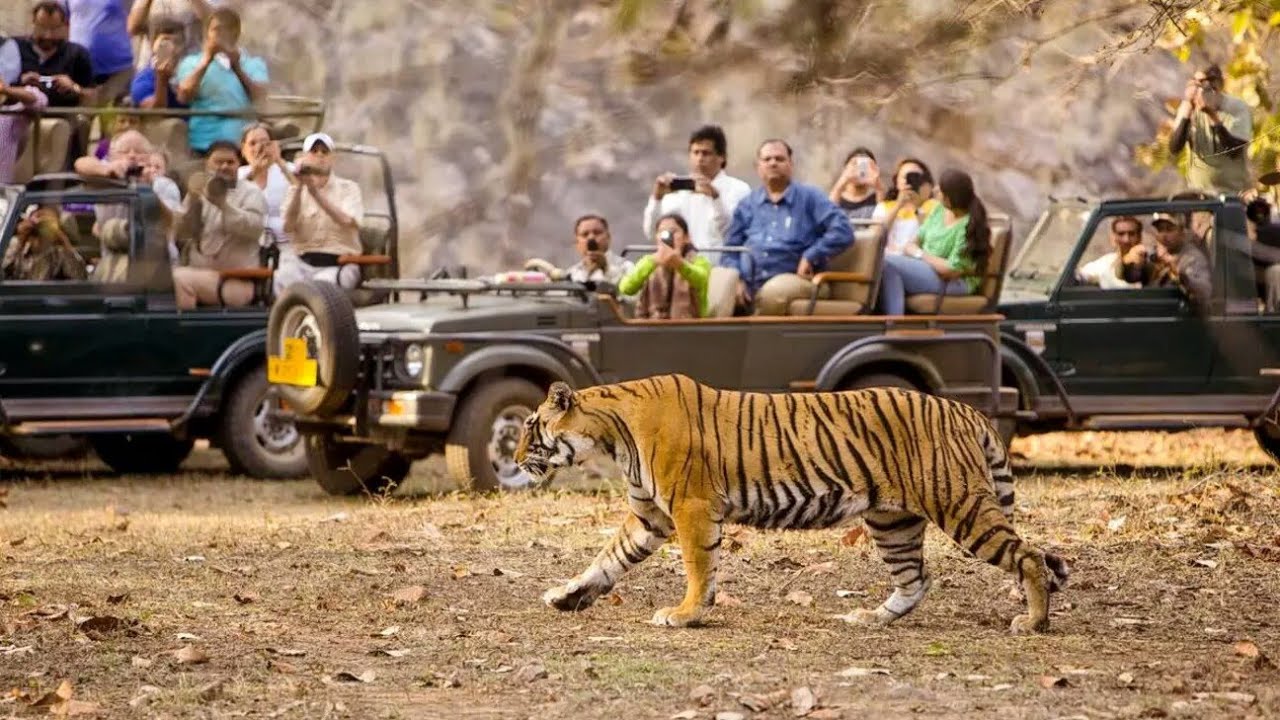 However, the number decreased again due to extensive hunting. In a study conducted between 1995-2000, researchers claimed to have spotted over 82 breeding tigers, with about six females in every 100 km sq.

As of 2018, the protected area has recorded about 93 Royal Bengal Tigers.

Besides tigers, Chitwan National Park is also famous for being the home of the Great One-horned Rhinoceros. After the establishment of the park, the population of these animals has increased to 544 in the century.

However, the population of these endangered species has continuously been attacked by hunting. Back in 2002, hunters killed 37 rhinos for their invaluable horns.

Chitwan National Park holds the largest population of Indian rhinoceros, with the number ranging between 605 to 645 in 2015.

Occupants of the Chitwan National Park

The CNP houses over 68 species of mammals, the most dominant being the tigers, rhinos, and elephants. Other animals found in the conservational area are golden jackals, jungle cats, fishing cats, leopard cats, Asian palm civets, Indian civets, yellow-throated martens, crab-eating mongooses, clouded leopards and many others.

Due to the varied species of birds found in CNP, it is also a paradise for birdwatchers. The sanctuary recorded 543 species of birds, which is more than in other national parks in Nepal.

The protected area has recorded the plight of endangered species of birds like the Bengal florican, Grey-crowned Prinia, grass warblers, spotted eagle, swamp francolin, and oriental darter, to name some.

The protected area has seen the presence of rock python, king cobra, and other 17 species of snakes. The lakes found around the Narayani-Rapti river system is a natural habitat to over 113 species of mugger crocodiles and fish.

About 70% of the conservational area is covered with Himalayan subtropical broadleaf forests, mainly sal and pine trees. The northern slopes of the Chitwan National Park are covered with shrubs and flowering trees like rosewood, elephant apple, grey downy balsam, axlewood, etc.

20% of the Terai region is covered with grasslands and Terai-Duar savanna. The national park is mostly covered with world’s tallest grasses like giant cane, Saccharum ravennae, khagra reed, and Kans grass, to name some.

Chitwan National Park is one of the most popular tourist destinations in Nepal.

When is the best time to visit Chitwan?

If you wish to see the Bengal tigers, then the time between October and December are considered to be the best. March and April are dry seasons and favour comfort travelling. However, the Chitwan National Park is closed during the rainy season which lasts from mid-July to October.

Things to do in Chitwan National Park:

For more information on National parks in Nepal, visit Hopnepal.com.