The festivities are coordinated by two activities, Indra Jātrā and Kumāri Jātrā. Indra Jātrā is characterised by masked god and devil dances, shows of holy artifacts and pictures in praise of the Lord Indra, the King of heaven. The Kumāri Jātrā is the living goddess Kumari's chariot procession.

Why is Indra Jatra celebrated?

Indra Jatra was established in the 10th century by King Gunakamadeva to celebrate the foundation of the town of Kathmandu. In the mid-18th century, Kumari Jatra started.

According to the lunar calendar, the festivities are kept, so the dates change. This year (2020), the festival takes place from August 30th to September 6th and the critical attraction day falls on September 1st.

At the festival, family members who died in the last year are still honoured. Kathmandu Durbar Square is the primary location for the festivities.

The festivities last eight days from the twelfth day of the light fortnight to the fourth day of Yanlā's dark fortnight (the eleventh month of the calendar of the lunar Nepal era).

According to mythology, Indra (Hindu god-king of heaven), disguised as a peasant, descended to earth in the pursuit of parijat (night jasmine), a white flower required for a ritual by his mother, Basundhara.

As he plucked the flowers in Maruhiti, an open spout of water at Maru, the people captured him and tied him like a typical robber.

He was then placed on show in Kathmandu's Maru town square. (In a re-enactment of this incident, a picture of Indra is shown at Maru and elsewhere during the festival with his hands bound)

His mother came to Kathmandu concerned about his long absence and walked around searching for him. This event commemorates Dagin's (almost) procession through the area.

As the city folk learned that Indra had caught himself, they were horrified and released him instantly. His mother vowed to have good dew over the winter to ensure a rich harvest, out of gratitude for his freedom.

It is claimed that from this festival onwards Kathmandu begins experiencing foggy mornings because of the boon.

The festival begins at Kathmandu Durbar Square with Yosin Thanegu (almost), the installation of Yosin or Linga, a pole from which Indra's banner is unfurled.

The pole is harvested from a forest near Nālā, a small town 29 km east of Kathmandu, a tree shorn by its roots and stripped of its wood. It is pulled to Durbar Square in stages by men pulling on cords.

Another first-day occurrence is Upāku Wanegu (almost) as participants visit shrines, carrying lighted incense to commemorate the deceased members of the family. Small butter lamps are often placed on the way. Some people sing hymns as they do the walk.

The circuitous road runs around the traditional portion of town's outskirts. The procession begins roughly at 4 pm.

Indra Jatra is best for the four significant processions that happen during the eight days. They are:

The Kumari Jatra, meaning Kumari's chariot festival corresponds with Indra Jatra. It began during the rule of Jaya Prakash Malla in 1756 A.D.

During this festival, three chariots bearing human images of the Ganesh, Bhairava and Kumari deities accompanied by musical bands are pulled on a three-day festival path through Kathmandu. The procession begins at approx—3 pm. The chariots are driven across the southern part of the city on the first day of Kumari Jatra identified as Kwaneyā (:). The second day is the day of the full moon named Yenya Punhi (almost).

The chariots are drawn across the northern portion before Asan during the procession known as Thaneyā (:). And the parade passes through the central part at Kilāgal on the third day of Nānichāyā (:).

Since 2012, Kumari's chariot has been pulled off on the third day of the chariot festival by an all women's team.

Mata Biye (almost) means providing lamps of butter. On Kwaneyā Day, the first day of the chariot festival, members of the Newar family honour their deceased by giving tiny butter lamps along the processional path.

They even show butter lamps as a display of gratitude to relatives and acquaintances along the route. The procession begins at approx—6 pm.

The Dāgin (alternative name: Dāgim) goddess procession re-enacts Indra mother's moving around the city in pursuit of her son. The parade comprises of one individual wearing a mask followed by a band of songs.

It begins at about 8 pm when Kumari's chariot returns to Maru after running across the city's southern portion. The procession starts from an alley at Maru square's south-west corner and moves along Kasthamandap's west side.

Participants take the road north of the festival to Asan and then return to Durbar Square. The procession proceeds to the city's southern end, before heading to Maru.

Bau Mata (almost) is an extended depiction of a holy snake made of reeds on which is mounted a series of oil lamps. The effigy is hung from poles held over the shoulders and placed down the path of the festival.

The procession begins at Maru from the Southside of Kasthamandap. When the Dagin procession comes back from the upper part of the city and enters Maru, that's the starting point for the Bau Mata procession. It begins at around 9 pm and is coordinated by the caste community, Manandhar.

Several exhibitions like: accompany the celebration of Indra Jatra

Bhairava masks are shown at different locations in Kathmandu during the festival's eight days. Bhairava is Shiva's powerful feature. The largest are Sweta Bhairava at Durbar Square, and Akash Bhairava at Indra Chok, respectively. 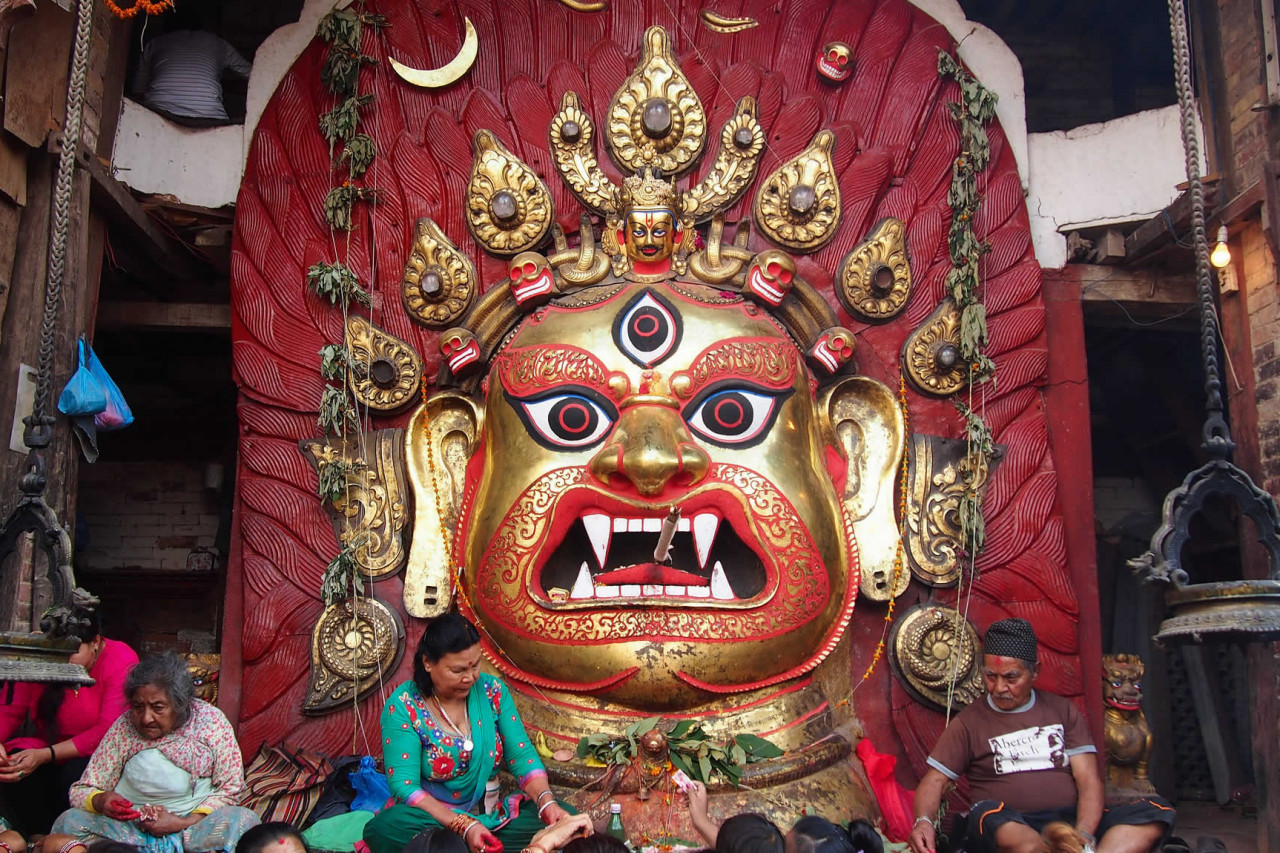 A pipe that sticks out Sweta Bhairava's mouth dispenses alcohol and rice beer on numerous days. At Wotu, next to Indra Chok, an image of Bākā Bhairava is exhibited.

Aakash Bhairava's mask is associated with the Mahabharata. Some say it is the head of the first Kirat King Yalamber. Various groups assemble and sing hymns at Indra Chowk each night.

A tableau is known as Dasavatar, or Vishnu's ten incarnations are seen every night on the steps of the temple in front of Kumari Building.

At Maru near Durbar Square and Indra Chok, Kathmandu, photographs of Indraraj Dyah with his outstretched hands tied with a rope are shown on an elevated platform.

Besides processions and exhibitions, Indra Jatra is also marked by masked dance performances like:

Majipā Lākhey's demon dance is held in the streets and plazas of the area. The Majipa Lakhey dancer and his entourage of musicians pass across the streets and crowds transmitting the festival atmosphere with much agility.

He, alongside Pulukisi, assists in crowd management before chariot procession.

The inhabitants of Kilagal Tole do this. It is assumed Pulu Kisi is Indra's carrier himself. In pursuit of his imprisoned father, Pulu Kisi passes through the streets of ancient Kathmandu city. People watch the masked figure scream with joy and amusement.

From time to time It performs fun and mischievous stuff like racing down the street pushing everyone that gets in his way and impressively waving his tail. Like most performers, he even has a lively band squad and a torchbearer in front of him.

The Devi Pyakhan or Devi nach was born during the time of Gunakar Raj, as per historical themes.

Halchok's Sawa Bhakku dance party, on the western side of the Kathmandu Valley, makes its rounds along the festival path, halting in large street squares to perform and collect devotees' offers.

The dancers consist of Bhairava carrying a shield (in blue) and his two attendants (in red). After the tone of their music, the group is also classified informally as Dhin Nāli Sintān.

Yenya is also the season for the production of open-air theatre. On the outskirts of the holy festival, events portraying societal issues, criticism and irony are performed on dance platforms or improvisational stages at market squares in the Kathmandu Valley.

The scripts, classified as Dabu Pyākhan (almost) have centuries of background.

On the last day, in a ceremony known as Yosin Kwathalegu (almost) the yosin pole installed at Durbar Square is taken down. It indicates the celebrations have concluded.

Celebration of Indra Jatra in Nepal

In Basantapur, Indra Jatra is celebrated by erecting poles depicting Indra in different locations across the city. The bars are called Yambodyah. They also do masked dances and Pulu Kisi dance.

Indra Jatra is also practised according to local customs in some districts of Terai (Nepal and Indian Northern Bihar), as Indra Puja. Rituals are different from in the Kathmandu Valley, but at the same time, the festival is observed suggesting a popular origin of the festival, possibly during the Lichhavi era.