The Bardiya National Park lying in the Western part of Nepal is much less frequently visited than the Chitwan National Park since it is much farther away from the capital, 233 miles (376 km). Yet tourists who are going to make it a worthy destination.

Here in this topic on the ways to get from Kathmandu to Bardiya.

Bardiya National Park is regarded as one of the most untouched conservation areas in the Terai region of Nepal. The protected area serves as a home to the threatened Royal Bengal Tiger and Nepal's famed One-horned Rhinoceros, as well as various other mammals and reptiles.

The park, situated in the far western district of Bardiya, is bounded by the Karnali River in the west front, the Churia River in the northern side and the Babai River flows through it.

The national park is surrounded by extensive Sal and riparian forests and thick elephant grass, making it a perfect habitat for all kinds of wild animals. The park is home to 30 different species of mammals, more than 250 varieties of raptors, and several types of reptiles.

There are more occurrences of tigers than in most other national parks, which draw tourists who repeatedly come to take pictures of the legendary cat. The park provides chances for catching fish in the Karnali and Babai rivers.

The best way to experience is in fall, winter and early summer once the weather is mild and dry, but not too humid. Park events include elephant trips, jeep safari, sportfishing, bird watching, and rafting assisted by a naturalist. 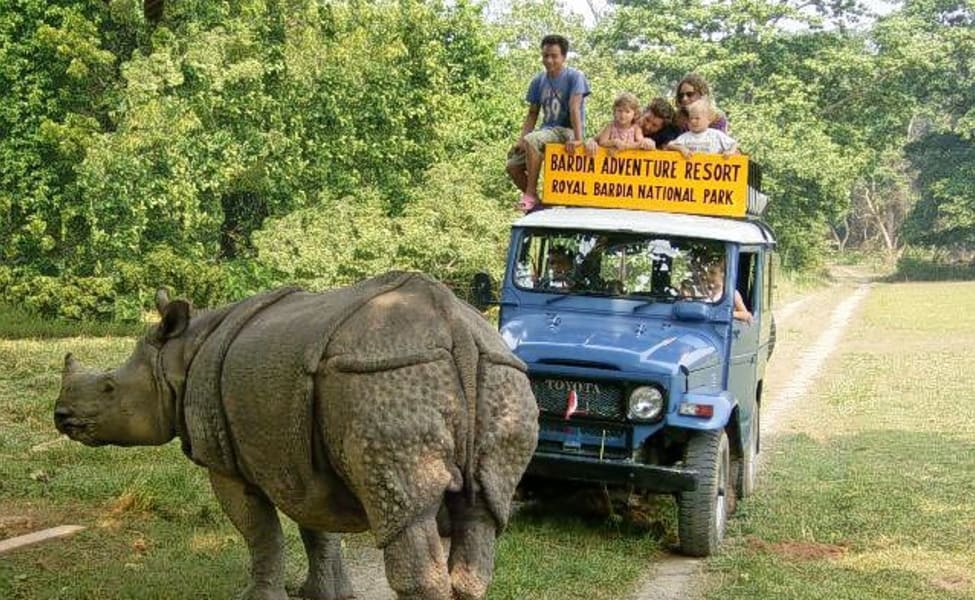 There are more than a variety of safari guesthouses in Bardiya that have excellent lodging and services for visitors to enjoy nature activities.

The park's head office in Thakurdwara is estimated an hour's drive from the Nepalgunj-Surkhet route.

Bardiya can also be approached by road, driving through Nepalgunj, where the nature reserve is just a 2 hours drive down the road.

Getting to Bardiya National Park from Kathmandu

There are two separate ways by which you can enter Bardiya National Park while travelling from the capital city of Nepal. They are:

By Air followed by a Private Transport (time take: 50 minutes in a plane and a 3 hrs drive)

Flying to the city of Nepalgunj, the boundary between Nepal and India, and then having a private transfer, the entire way is by far the fastest way to get to Bardiya from Kathmandu.

Flights depart from the terminal building of Tribhuvan International Airport several times a day and take less than an hour to enter Nepalgunj. There are a couple of early morning planes, so try to hop on one of these so you've got time to get on your way to Bardiya.

Ask for a seat on the right side of the aircraft, too, and you'll be treated to a fantastic view on a clear day. It's not much worth sticking about in Nepalgunj, so it's best to schedule a pick-up to take you directly to Bardiya.

Since Bardia is very out of the way, most of Bardiya's accommodation will be able to schedule pick-ups for you, much as your service agent. The area of Thakurdwara is the head office of Bardiya, where you can find a hotel. It's about a three-hour ride from Nepalgunj to Thakurdwara.

Going all the way by bus is only advised if you're on a strict budget since it's a long and tiring ride. Many busses travel every day from Kathmandu to Nepalgunj and take over 12 hours.

Notice that this is not a more convenient tourist bus service (as you'll get around Kathmandu and Pokhara or Chitwan) but a local bus service. They seem to be very crowded, and they're very uncommon to be air-conditioned, they can play deafening music, and they're likely to be cramped.

The long trip could be longer than expected if you were caught in traffic leaving the Kathmandu Valley or along the Prithvi Highway (both of which are quite likely).

The first part of your trip to Bardiya National Park will take you along the Prithvi Highway, which links Kathmandu and Pokhara. The hill, the fields and the scenery of the river are very enticing.

At Mugling, you turn south to Terai (the plains neighbouring India) and proceed west through Narayangadh, Butwal, and other settlements on the Terai.

While the terrain is not rugged, the highways are not in good shape and the Terai is very heavily populated, so you're going to pass through many cities and metropolitan areas.

In Nepalganj, you're going to have to make a trip to Bardia (Thakurdwara). Local busses around Nepalganj and Thakurdwara depart a couple of times a day.

If you reach in Nepalgunj late in the night, you're going to have to stay the night, because there isn't a lot of attraction for tourists here. Alternatively, you can arrange a switch via your accommodation in Bardiya, as travellers who fly to Nepalgunj, prefer to do.