Shree Muktinath Temple is a Vishnu temple and is holy to Hindus and Buddhists alike. It is situated at the foot of the Thorong La mountain pass in Mustang, Nepal, in the Muktinath Region. Shree Muktinath temple is one of the highest temples in the world (3,800 m of altitude).

The location is near Ranipauwa village which is also wrongly named Muktinath. This temple is ranked 106th among the 108 Divya Desam (premium temples) accessible which the Sri Vaishnava sect finds sacred.

Why the name Muktinath?

It is classified within Hinduism as Mukti Kshetra, which literally means the 'location of deliverance' or mokshah'. The temple houses the Shila of Saligram, believed to be Sriman's perfect shape.

The term "Muktinath" or sometimes wrongly spelt as "Mukthinath" is formed from the verbs "Mukti" and "Nath." "Mukti" means "Nirvana or liberation" while "Nath" means "Lord or Father". 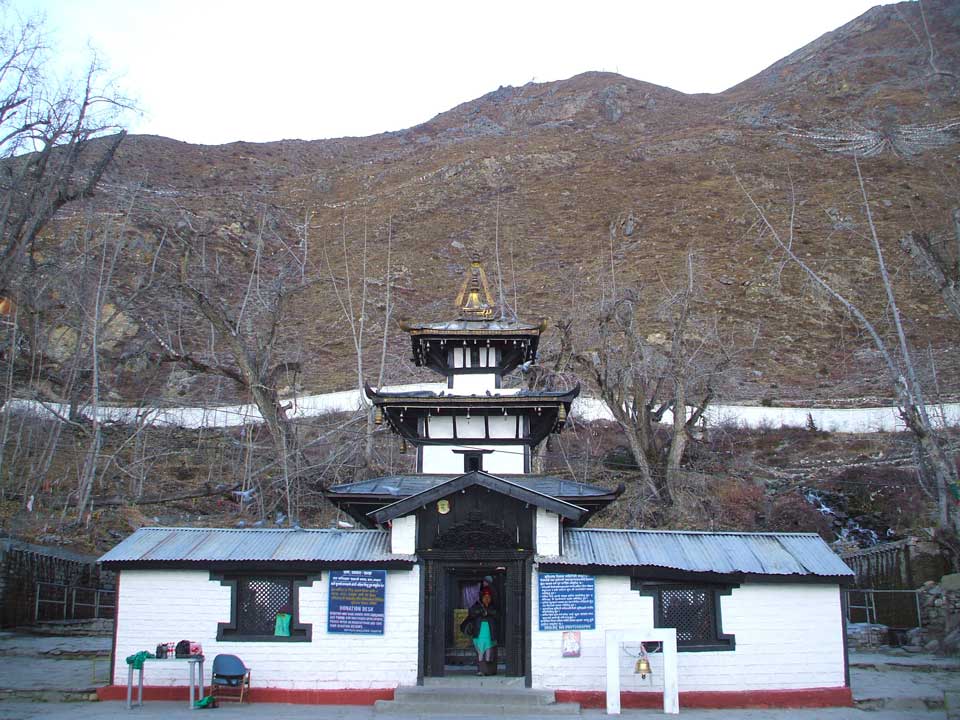 To all the followers of Hinduism of the South Asian subcontinent, Mukti has immense significance. Muktinath, this Sanskrit word has mystical overtone and a sort of a sentimental ring to it for the practising Hindus themselves. The Buddhists call it Chumig Gyatsa which means "Hundred Seas" in Tibetan.

Muktinath is a significant location of dakinis, goddesses identified as Sky Dancers and one of the 24 Tantric sites for Tibetan Buddhists. We consider the murti as a representation of Avalokiteśvara, which represents all Buddhas' compassion.

How can we reach Shree Muktinath Temple?

At an elevation of 3,710 meters above sea level, Muktinath Temple is situated 24 km northeast of Jomsom.

The best way to reach Muktinath temple is via road from Kathmandu to Pokhara, then to Beni. From Beni catch a bus to Jomsom bypassing Ghasa along the way.

Early morning take direct buses from Kathmandu(Thamel) to Beni arrive at 8 pm. Take the bus directly from Beni to Jomsom early in the morning. Thus reaching Muktinath by noon, this will provide plenty of time for darshan and return as well. 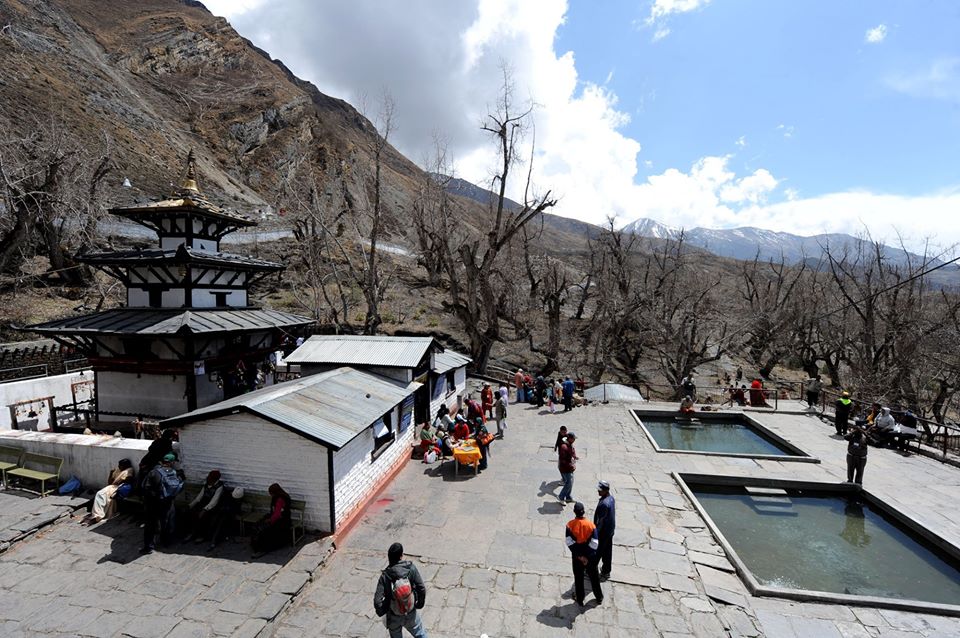 Muktinath Mandir can also be reached in the Annapurna Conservation Park, Mustang district of Nepal, after passing Thorong-La mountain pass. This temple is protected on one of the famous "Annapurna Road" trekking roads.

You can catch international flights to Kathmandu from Bangalore, Delhi, Chennai, and Mumbai (India) as well. From the capital city, you can travel via air to Pokhara or Jomsom airport.

Note: No special trekking permits for visiting the Muktinath temple.

Being a tourist site, the Muktinath region offers several hotels and lodging services. Also, you can rest at hotels in Jomsom.

The perfect time to reach Muktinath is in March, April, May, June, August, October and November. The atmosphere should be bright during these months so that snowcapped mountain can be closely watched.

The Tibetan Buddhist tradition says that on his way to Tibet, Guru Rinpoche, also known as Padmasambhava, the father of Tibetan Buddhism was meditating at Muktinath.

Most Hindu-tradition saints admire this shrine. Scripts narrating the significance of the temple are found in the Gandaki Mahathmya at Vishnu Purana.

The downstream waterway from Muktinath along Kali Gandaki is the source of the Silas or Shaligrams which are required to create a Vishnu temple. Hindus and Buddhists regard this to be one of the holiest sites of pilgrimage.

It has 108 water sources, an amount which in Hindu mythology has considerable significance. The Hindu astrology discusses 12 zodiacs (or Rashi) and nine planets (or Graha) as an indication of the ambiguity around the number 108, offering a total of 108 variations.

Twenty-seven lunar mansions (or Nakshatras) are broken into four quarters (or Padas), offering a total of 108 Padas.

Structure of the Shree Muktinath Temple

The Shree Muktinath's main shrine is considered one of the eight most holy shrines by Hindu Vaishnavas, recognized as the Svayam Vyakta Kshetras. The others are Srirangam, Srimushnam, Tirupati, Naimisharanya, Thotadri, Badrinath, and Pushkar.

The temple is small, and the murti is made of gold of approximately a man's height. The prakaram (outer courtyard) has 108 faces of bulls that pour water into.

The holy water that flows throughout the temple complex in 108 tanks signifies the most sacred waters of Pushkarini (Temple Tanks) from the 108 Sri Vaishnava Divya Desams, where devotees take their spiritual baths even at freezing temperatures.

Buddhists hold worship, with a Buddhist monk present. In the temple, a nearby priest performs pujas (prayer rituals). The pilgrims are supposed to give the lord a prasad (religious food offering).

It's a theory, according to Hinduism, that this planet is "MAYA" (an illusion) with a life-cycle with conception and rebirth. Everybody is hoping to get out of this loop, to reach nirvana.

A visit to Muktinath would allow this goal to be accomplished. The temple is listed as a Divyadesam, one of the 108 temples described in the book on Vishnu.

This temple, where the lord lives in the form of Sri Paramapatha Nathan with his holy consorts of Sri, Bhoomi, Neela and Gotha Devis, is visited by a massive crowd of devotees.

Sri Vaishnava religion is a sub-sect of Hinduism, prevalent in southern India's present-day Tamil Nadu. The Gandaki River, which flows adjacent to the temple, has a kind of stone named Saligram.

The stone's different designs are decorated as various kinds of Vishnu. Vasudeva is represented by white, black as Vishnu, green as Narayana, blue as Krishna, golden yellow & reddish yellow as Narasimha and Vamana in yellow is called the colour grey.

The stones are found in various forms with some conch forms and the Vishnu marks, Chakra.

The Muktinath region is inhabited mostly by Gurung and Magars especially in the lower valley of Kali Gandaki. The Thakalis live around Jomsom while the Lopa's with strong Tibetan origins live around Muktinath and in the Mustang.

Their traditions and dress are distinct, and the Annapurna Circuit trek is suitable for witnessing the uniqueness and practices of the ethnic groups.

Hinduism occupies the lower sections while the Tibetan Buddhism predominates as one progresses higher up.

This region is distinctive in the architecture of villages and the style of buildings. The houses are built to shield the occupants from the heavy winds that everyday blow up the valley from late morning.

For more information on temples in Nepal, visit hopnepal.com.