The temple of Bindhyabasini is the oldest in the city of Pokhara, Nepal and is situated in Ward No. 2, Miruwa. It regularly attracts many local Nepalese from across the region, as well as foreigners.

The principal temple is devoted to goddess Bindhyabasini, a Bhagawati who is believed to be Goddess Kali's incarnation. Smaller temples are within the temple premises which are dedicated to Goddess Saraswati, Shiva, Hanuman, and Ganesha.

The Bindhyabasini temple is situated on top of a small hill in Pokhara and can be reached from the east and northeast by stone staircases. Bindhyabasini is considered one of western Nepal's principal and highest Shaktipiths.

It is situated in a narrow hill-lock between the primary old market and Bagar, 3,000 feet above sea level. Goddess Durga inside the temple is depicted in the shape of a Saligram. A Saligram is a sacred stone in Hinduism, which is used for worship purposes.

This is an ammonite fossil, mainly found in the Upper Mustang Kaligandaki Swamp regions. Lord Vishnu is considered to be a symbolic type.

The views of the Himalayas from the temple's north are spectacular, while the expanse of Pokhara town can be seen from the south.

How to reach Bindhyabasini Temple?

The shrine of Bindhyabasini remains in Pokhara, in Bagar. More precisely, it sits on the highway to Pokhara- Baglung. The roadways are well built, and it won't be a challenge to drive back and forth from the temple.

When you're travelling from Lakeside, you can quickly catch a bus that will drive you to this temple. This will take about 25 and 30 minutes to get there.

If you want to visit the temple more simply, you can hire a private cab along with a tourist guide from a travelling agency. However, the price may vary, but its the best option if you don't know your way around Pokhara.

You don't need some permit or payments to access the Bindhyabasini temple. Please do not enter the temple premises wearing shoes as it is deemed unholy. 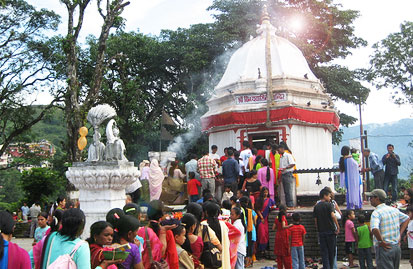 You can only take pictures if you are allowed to do so by the authorities. There is also a donation box, and you can make some fast contributions if you feel generous.

The temple was built around the 1760s when King Girvan Yuddha Bikram Shah, the then king of Nepal, appointed Kahindra Padhya Poudel as the temple priest to succeed Harivamsha Padhya in June 1815 AD.

The priest said he might use the Guthi Lands blessed with a daily and ritual puja for the temple.

Reason behind the start of Bindhyabasini Temple

The then monarch of Kaski, Siddhi Narayan Shah or the ruler of Parbat Khadgaman Malla had a vision of building up a temple for the goddess Bindhyabasini.

He had his people bound for Bindhyachal Parbat (currently in Uttar Pradesh, India) to carry back a goddess statue.

The people set out for a night at the temple's new position upon departure. As they got up to continue their trip the next morning, they found they could not raise the statue off the table.

The king, aware of the condition, ordered his subjects to build the temple, and thus the beginning of the temple of Bindhyabasini.

Miruwa's people widely assume that the goddess Bindhyabasini is the substitute for Devaki and Vasudeva's eighth child (Lord Krishna).

When Kansa (Krishna's maternal uncle) wanted to destroy the traded child she, who is herself a Devi, dies and becomes now goddess Bindhyabasini.

Structure of the Bindhyabasini Temple

There are little details regarding the initial temple architecture (and it is believed that at some stage it was rebuilt), but the new temple is in Shikhara architecture. The temple design of Shikhara style is considered older than the design of Pagoda, which is more prevalent.

There are lots of concerns about the temple's outer construction. People assume it was initially small, and the temple saw the restoration over time and is what it is today.

Management of the Bindhaybasini Temple

Currently, the temple is operated by Bindhyabasini Dharmik Chettra Bikash Samiti who has made many changes and renovated the area.

On March 07, 2019, a 12-person lift was installed in the temple premises and inaugurated by the President of Nepal. The elevator is used mainly by tourists and seniors with disabilities.

In January 2016, a Senior Citizens Friendship Center was established. The centre offers a meeting place for senior citizens, provides food every day to those visiting, and arranges for talks/seminars on a variety of subjects.

Other temples inside Bindhyabasini Temple compound

Besides the main temple dedicated to Goddess Bindhyabashini, there are also many small temples inside the Bindhyabasini complex. They are:

The temple is also facilitated with a Bindhyabasini Sanskrit Vidyalaya (school), a book store, and a Jogi Patti (inn).

For more information on temples in Nepal and travel packages, do visit Hopnepal.com.