Among the ten national parks found in Nepal, Shey Phoksundo National Park is the largest and the only trans-Himalayan national park. The wildlife reserve with an overall area of 3,555 sq km lies in the mid-western region of Nepal in the districts of Mugu and Dolpa.

The Shey Phoksundo National Park is best known for the Phoksundo Lake which lies at the height of 3,612 m above sea level. The conservational zone lies at a very high altitude whose elevation ranges between 2,130 m to 6,885 m.

Where is Shey Phoksundo National Park?

Established in 1984, the Shey Phoksundo National Park lies in the trans-Himalayan region in the northwestern part of Nepal. The conservational area spreads over 3,555 sq km of land and is further surrounded by a buffer zone of 1,349 sq km, which was added in 1998.

The conservational area extends into the Dolpa and Mugu districts.

How do you get to Shey in Phoksundo National Park?

The best and easy way to reach the protected area is via flight which leaves from Kathmandu to Nepalgunj. On reaching Nepalgunj, you can take another 40 mins flight to Juphal airport in Dolpo. From there you need to walk for half a day to reach the entrance of the park at Suligad.

The national park's main headquarters are located in Suligad, Palam Ringmo, Chhepka and Toijem from where you can receive a trekking permit. Individual trekking is only allowed for a trip to Phoksundo lake and Ringmo.

To visit the trans-Himalayan region lying in the inner Dolpo region, you must apply for a group trekking permit. Permits can be arranged from any trekking agency of Nepal.

The wildlife sanctuary provides a varied range of mesmerizing landscape and is ranked amongst the most scenic mountain national parks of the world.

A significant part of the park lies in the northern region of the Himalayan belt. The elevations in the park range between 2,130 m in the southeast (Ankhe) and 6,883 m (near the summit of Kanjiroba Himal).

The major rivers that flow through the national park are Nmajung, Panjang, Khung, Jugdual and Suligad (tributaries of Thuli Bheri River), and the Langu river.

The park contains many gompas amongst which the well known are Shey Gompa, established in the 11th century and Thashung Gompa built near the Phoksundo Lake.

The major attraction of the national park is the Phoksundo Lake which lies at an altitude of 3,612 m (11,850 ft). It is Nepal's most profound and second-largest lake which lies in the upper part of the Suligad Valley.

Designated as a Ramsar site in 2007, the lake is 136.20 m in-depth and is surrounded by 20 Buddhist stupas and one gompa in the eastern part of the lake.

The lake is surrounded by glaciers in all sides and is well known for the magnificent turquoise colour. The outlet of the lake forms Nepal's highest waterfall with a height of 167 m.

Since the conservation area extends from the north to the south of the Himalayan crest, it experiences a wide range of weather from an arid environment to heavy monsoon.

The reserve experiences maximum rainfall of 1,500 mm to 500 mm from July to September. However, the Kanjiroba and Dhaulagiri mountain range forms a barrier and prevents the rain from reaching the trans-Himalayan region. 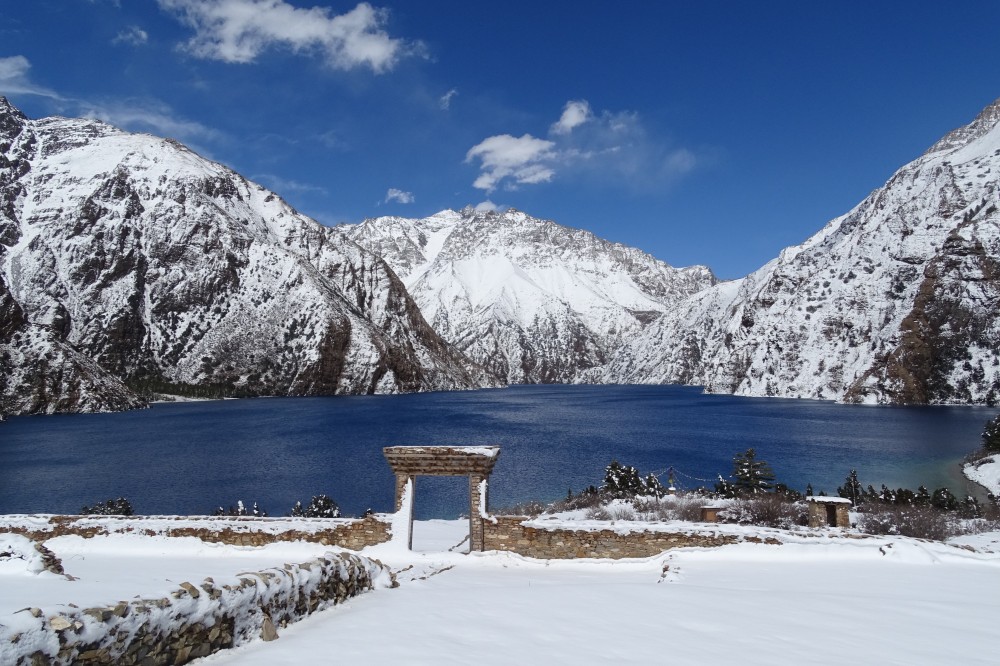 The winters are extremely harsh and the park above 2,500 experience regular snowfall while the temperature in areas above 3,000 m remains well below freezing point.

The protected area lies within the elevation of 2,130 m - 6,885 m and is home to over 286 species of flowering plants which are of ethnobotanical significance.

The forests in the northern region park are covered with trees of Rhododendron, white Himalayan birch, Juniper, Salix, and Caragna shrubs. However, only 5% of the park is forested and consists of barren lands in the Upper Himalayas and the Trans-Himalayan region.

The high meadows in the conservational are covered with silver fir, and the Suligad Valley is dominated by blue Pine, Rhododendron, Silver fir, Hemlock, Spruce, Cedar, Poplar, and bamboos.

The grasslands and forests of the Shey Phoksundo area is a vital habitat for many endangered species of animals like the musk deer, grey wolf, snow leopard, and blue sheep.

Other species of mammals like Himalayan tahr, great Tibetan sheep, goral, jackal, leopard, yellow-throated marten, and Himalayan black bear are also found in the different regions of the park.

The wildlife reserve is home to Paralasa nepalaica, the highest-flying butterfly and other 29 varieties of butterflies.

The conservational area is also a natural habitat for more than 200 species of birds and is an essential site for birdwatching. The reserve has recorded the flight of birds like the wood snipe, Tibetan partridge, white-throated tit, crimson-eared rosefinch, and wood accentor.

The Shey Phoksundo National Park is also home to over 9,000 people who live in the highest settlements known to man. The most famous village in the region is Ringmo, which is located amid the national park.

The primary occupation of the people living in the village is farming. The major crops grown in the region are potatoes, mustard, buckwheat, barley, and beans.

They also practise animal husbandry and raise the livestock for food and wool. The people barter their goods with the Tibetans for wool and salt.

They follow a typical Tibetan lifestyle, and most of the people are followers of Buddism.

The national park doesn't boast of five-star hotels, but standard accommodations can be found in Sangta, Dunai, Ringmo, and Chhepka. The conservation area is ladened with campsites, which provides the necessary shelter, public toilets, and rubbish bins.

Trekking lodges are also available in the above villages where you replenish your supplies of food and other accessories.

For more details on other national parks located in Nepal, please visit Hopnepal.com.